The golden eagle (Aquila chrysaetos) is one of the best-known birds of prey in the northern hemisphere. It is the most widely distributed species of eagle. Golden eagles use their agility and speed combined with powerful feet and massive, sharp talons to snatch up prey. They eat hares, rabbits, marmots and other ground squirrels.

Once common across the Holarctic, it has gone from many areas heavily populated by humans. The species is still widespread. It lives in Eurasia, North America, and parts of North Africa.

Like all eagles, it belongs to the family Accipitridae. It is one of the largest birds of prey in North America; only the California condor gets larger. Golden eagles also live in the Scottish Highlands. 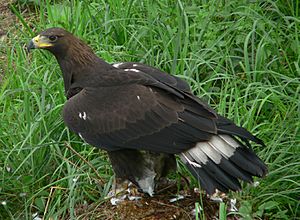 Adult Golden Eagles range considerably in size, though some are among the largest eagles of the genus Aquila. Most subspecies of Golden Eagle vary in the range from 66 to 90 centimetres (26 to 35 in) in length, wingspan can range from 180 to 234 centimetres (71 to 92 in), and weight approximately 2.5 to 7 kilograms (5.5 to 15.4 lb). The smallest-bodied subspecies is A. c. japonica while A. c. daphanea is the largest on average. As with many Accipitriformes, females are considerably larger than males; in the case of the Golden Eagle they weigh one-quarter to one-third more than male birds.

The plumage colour ranges from black-brown to dark brown, with a striking golden-buff crown and nape, which glows in the sunlight and light reflects the golden tint, which give the bird its name. The upper wings also have an irregular lighter area. Immature birds resemble adults, but have a duller more mottled appearance. Also they have a white-banded tail and a white patch at the carpal joint, that gradually disappear with every moult until full adult plumage is reached in the fifth year. Contour feathers may be moulted in a short time span. 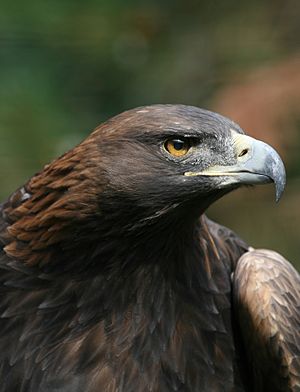 Golden eagle predominant prey in North America is leporids (hares and rabbits) and sciurids (ground squirrels, prairie dogs and marmots), the two groups normally comprising 50% to 94% of the diet of nesting eagles. Additional mammals regularly taken include mice, martens, foxes, young deer and mountain goats. The secondary important prey group for eagles are other birds. Various gallinaceous birds (largely phasianids, ptarmigans and grouse) are the most significant bird prey. However, virtually any bird, from a jay to a swan, is potential prey.

During winter months when prey is scarce, Golden Eagles scavenge on carrion to supplement their diet. Sometimes when no carrion is available golden eagles will hunt down large prey, such as goat-antelopes and caribou.

Golden Eagles have exceptional eyesight and can spot prey from extreme distances. The Golden Eagle has a resolution power many times more powerful than that of a human. The huge talons are used for crushing, killing and carrying the prey, whilst the beak is used for tearing and eating. A pair often have a division of labour while hunting, one bird may drive the prey towards its waiting partner. On the other hand, the size difference between males and females allows more unpaired birds to live off the land, which is helpful to maintain a sufficiently large population for this large and slowly-maturing bird. 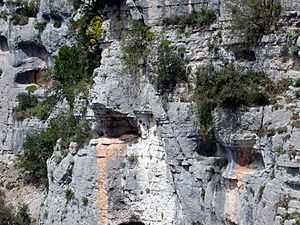 Golden Eagle eyrie (in hollow at left center) in the Valley of the Siagne de la Pare, Alpes-Maritimes (France).

Golden Eagles usually mate for life. They build several eyries within their territory and use them alternately for several years. These nests consist of heavy tree branches, upholstered with grass when in use.

The female lays one to four (usually two) eggs between January and September (depending on the locality). The eggs vary from all white to white with cinnamon or brown spots and blotches. They start incubation immediately after the first egg is laid, and after 40 to 45 days the young hatch.

They are covered in fluffy white down and are fed for fifty days before they are able to make their first flight attempts and eat on their own. 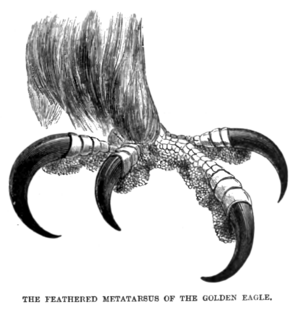 The formidable foot and talons of a golden eagle

All content from Kiddle encyclopedia articles (including the article images and facts) can be freely used under Attribution-ShareAlike license, unless stated otherwise. Cite this article:
Golden eagle Facts for Kids. Kiddle Encyclopedia.