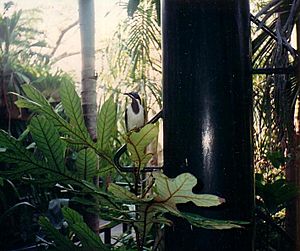 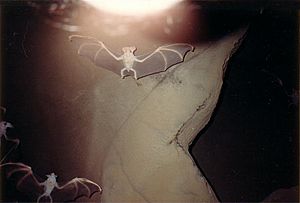 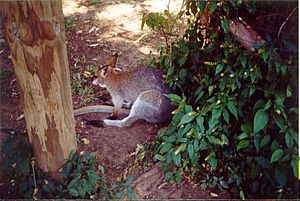 Gondwana Rainforest Sanctuary, created by the Joffe Group, was due to open on 20 June 1992 (but in fact opened a week later). It was set up as an Australian wildlife sanctuary and tourist attraction in the South Bank Parklands, in Brisbane, Queensland, Australia, following World Expo 88. There were about 500 animals at the sanctuary.

The Sanctuary was created as a huge bird aviary with a range of display dioramas throughout and a series of outer and inner sculpted concrete panels artistically coated and sprayed to look like rock. The sanctuary featured many species of Australian birds, including fairy wrens, figbirds, bowerbirds, kingfishers, curlews, lorikeets, parrots, finches, pigeons, doves, geese, teals and cockatoos, among others of the land birds - as well as various species of waterfowl.

The Sanctuary included a series of educational displays outlining the creation of Australia through Gondwanan times and the evolution of Australian animals. A number of large animated Australian dinosaurs allowed visitors to step back into time.

At the same time as the wildlife sanctuary, there was a Butterfly House (later renamed as the Butterfly and Insect House), as well as canals and bridges and launches.

The Sanctuary went into receivership in 1993 due to the cost over runs caused due to a lack of access to the site during a very wet construction period. In January, 1998, Gondwana Rainforest Sanctuary was closed down and the animals relocated. A rainforest walk and green space is all that now remains. In April, 1998, the Butterfly and Insect House was renamed as South Bank Wildlife Sanctuary, with the introduction of other wildlife.

All content from Kiddle encyclopedia articles (including the article images and facts) can be freely used under Attribution-ShareAlike license, unless stated otherwise. Cite this article:
Gondwana Rainforest Sanctuary Facts for Kids. Kiddle Encyclopedia.