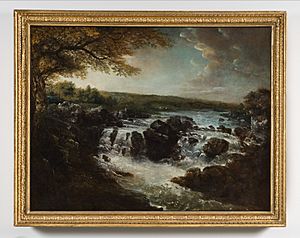 Great Falls of the Potomac, oil on canvas, by George Beck, 1797

Great Falls is a series of rapids and waterfalls on the Potomac River, 14 miles (23 km) upstream from Washington, D.C., on the border of Montgomery County, Maryland and Fairfax County, Virginia. Great Falls Park, managed as part of George Washington Memorial Parkway, is on the southern banks in Virginia, and Chesapeake and Ohio Canal National Historical Park parkland is along the northern banks of the river in Maryland. Both are operated by the National Park Service. The Potomac and the falls themselves are legally entirely within Maryland, with the state and county boundaries following the south bank of the river.

The Great Falls area is popular for outdoor activities such as kayaking, whitewater rafting, rock climbing, and hiking.

Great Falls and Little Falls (about 5 miles downstream) are named in contradistinction to one another.

The Potomac narrows significantly as it passes over the falls and through Mather Gorge. Heavy rain or snow in the watershed upstream causes white-water floods which entirely submerge the rocks and even threaten the adjacent park visitor center (built on stilts for this reason). A pillar at the Virginia overlook, well above the river, marks the level of the 1936 Potomac Flood.

The rocks which form the falls and river gorge are a strongly metamorphized schist.

Remains of the feeder dam, for the Chesapeake and Ohio Canal, at Great Falls

Various attempts to build canals around Great Falls were undertaken. The remains of the Patowmack Canal on the Virginia side, were an early attempt to skirt the falls, using 5 locks. That canal was started by George Washington. Later the Chesapeake and Ohio Canal was built on the Maryland side of the falls, and ultimately connected the Potomac tidewater with Cumberland, Maryland. The Chesapeake and Ohio also used the Great Falls as a feeder (now abandoned) to supply water for its own use.

All content from Kiddle encyclopedia articles (including the article images and facts) can be freely used under Attribution-ShareAlike license, unless stated otherwise. Cite this article:
Great Falls (Potomac River) Facts for Kids. Kiddle Encyclopedia.