Greenfield is a village in Saddleworth, England, 4 miles (6.4 km) east of Oldham, and 13 miles (21 km) northeast of Manchester. It lies in a broad rural area at the southern edge of the South Pennines. To the east of the village Dovestone Reservoir, Chew Reservoir and Greenfield Reservoir lie in the Peak District National Park.

Historically part of the West Riding of Yorkshire, Greenfield is in the Chew Valley, on the main A635 road from Ashton-under-Lyne to Holmfirth.

A Roman road passes along the Saddleworth hills, from the fort of Ardotalia in Glossop to Castleshaw Roman fort. The route of the Roman road passes through Greenfield and crosses Chew Brook at Packhorse Bridge.

The old stone houses of Saddleworth date from the 17th century and were home to farmers and hand loom weavers in the woollen trade. The first industrial looms were also designed and built in Saddleworth. England's highest church 'The Heights' and canal tunnel 'Standedge Tunnel' are also here, the latter dating from the end of the 18th century and being a Thomas Telford project.

As a matter of interest, the world's first rock climbers' sit harness was invented in Saddleworth in the 1970s, variations of it now forming the basis of almost all the world's climbing sit harnesses.

In 1849 the Boarshurst Silver Band was formed as the village band. This brass band is still in existence.website

Greenfield also contains four reservoirs, three of which are linked to one another: Greenfield, Yeoman Hey and Dovestones. The fourth is Chew Reservoir at the head of Chew Valley, which is the highest man-made reservoir in England. There is a yachting club on Dovestone Reservoir, the largest of these, and a set of walking paths round the first three. A steep walking path also connects Dovestones to Chew Reservoir. Much of the area covered by the reservoirs lies within the boundary of the Peak District National Park.

Saddleworth Moor rises above Greenfield and leads over impressively barren and disorientating moorlands to Holmfirth.

Greenfield is also the home of an amateur rugby league side, Saddleworth Rangers, as well as Greenfield Cricket Club and Saddleworth Cricket Club. There are two junior and infant schools, and three churches (one Methodist and two Anglican).

Pots and Pans is a locally well-known hill overlooking the village. It is the site of the Saddleworth war memorial (a Grade II listed building), constructed in 1923. Approximately 1,200 feet (370 m) above sea level, it is visible from seven of the ten villages that comprise Saddleworth. A service is held there on Remembrance Sunday each year. 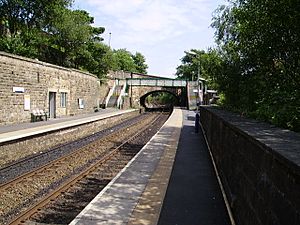 Since the Oldham Loop closed, Greenfield is the only place in Saddleworth and the whole Metropolitan Borough of Oldham which has a railway station. Grotton & Springhead, Delph and Grasscroft stations closed in 1955, whilst Diggle and Saddleworth stations closed in 1968. Greenfield railway station lies along the Huddersfield Line with services running towards Huddersfield via Marsden and Slaithwaite and towards Manchester Victoria via Mossley, Stalybridge and Ashton-under-Lyne. A second line, known as the Micklehurst Line, cut through the village and was mainly used for freight. This closed in 1966 and the viaducts were removed in the mid 1970s, the former route now occupied, in the main, by a bridleway.

The main bus services in Greenfield are run by First Greater Manchester. The terminus in Greenfield, at the Clarence Hotel, runs a half-hourly Monday-Saturday daytime service and hourly evening and Sunday service to Manchester Piccadilly via Oldham.

Greenfield is one of the towns and villages which holds an annual Whit Friday brass band contest and the annual Road End Fair is held every Maundy Thursday in the centre of the village.

All content from Kiddle encyclopedia articles (including the article images and facts) can be freely used under Attribution-ShareAlike license, unless stated otherwise. Cite this article:
Greenfield, Greater Manchester Facts for Kids. Kiddle Encyclopedia.