The Royal Burgh of Haddington (Scots: Haidintoun, Scottish Gaelic: Baile Adainn) is a town in East Lothian, Scotland. It is the main administrative, cultural and geographical centre for East Lothian, which as a result of late-nineteenth century Scottish local government reforms took the form of the county of Haddingtonshire for the period from 1889 to 1921. It lies about 17 miles (27 kilometres) east of Edinburgh. The name Haddington is Anglo-Saxon, dating from the sixth or seventh century AD when the area was incorporated into the kingdom of Bernicia. The town, like the rest of the Lothian region, was ceded by King Edgar of England and became part of Scotland in the tenth century. Haddington received burghal status, one of the earliest to do so, during the reign of David I (1124–1153), giving it trading rights which encouraged its growth into a market town.

Today, Haddington is a small town with a population of fewer than 10,000 people. But during the High Middle Ages it was the fourth-biggest town in Scotland (after Aberdeen, Roxburgh and Edinburgh). In the middle of the town is the Haddington Town House, completed in 1745 based on a plan by William Adam. When first built, it contained markets on the ground floor, and an assembly hall on the first floor to which improvements were made in 1788, and a spire was added in 1831. Nearby is the Corn Exchange (1854) and the county courthouse (1833). Other notable nearby sites include: the Jane Welsh Carlyle House; Mitchell's Close; and a building on the High Street that was the birthplace of the author and government reformer Samuel Smiles and is marked by a commemorative plaque. John Knox was probably born in Haddington and Knox Academy, the local high school, is named after him. 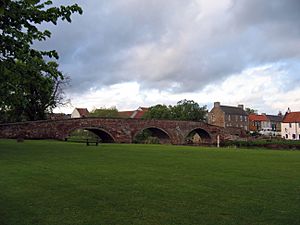 Amisfield House was located east of Haddington, south of the River Tyne. Designed by architect Isaac Ware and built of Garvald red freestone for Colonel Francis Charteris, it was described in The Buildings of Scotland as "the most important building of the orthodox Palladian school in Scotland." John Henderson built the walled garden in 1783, and the castellated stable block in 1785. The park in front of the house, possibly landscaped by James Bowie, is today entirely ploughed. A victim of dry rot, the house was demolished in 1928.

All that remains of Amisfield today are the summer house, walled garden, ice house, chapel, and gates.

Lennoxlove House, a historic 13th-century house and estate, lies half a mile south of Haddington. Built by the Giffards of Yester, it was originally named Lethington. It was once home to the Maitland family, notably Sir Richard Maitland, and his son William Maitland of Lethington, Secretary of State to Mary, Queen of Scots'. The Maitlands left Lennoxlove in the 17th century, and it is now the seat of the Duke of Hamilton and Brandon.

The world's earliest surviving records of a lodge of free gardeners come from Haddington, in 1676. 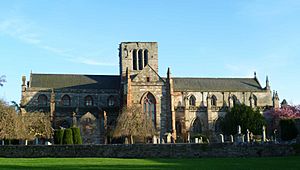 The Parish Church of St Mary's is today part of the Church of Scotland, but includes an Episcopalian chapel, the Lauderdale Aisle, containing the mausoleum of the Maitland Earls of Lauderdale. It is the longest parish church in Scotland and is in regular use for worship and musical events. It is directly adjacent to the river Tyne, beside the 12th century Nungate bridge.

The present building (built with red sandstone from nearby Garvald) was started in 1375 (an earlier St Mary's Church having been destroyed by the English in 1356), and consecrated in 1410, despite building work not being finished until 1487. The church was partially destroyed during the 1548-49 Siege of Haddington that followed the Rough Wooing of Henry VIII, and on the advice of John Knox, it was restored "frae the tower to the West door". Thus the nave became the church and the choir and transepts were left ruined until the whole church was restored in the 1970s. The Lammermuir pipe organ was built in 1990.

A set of eight bells hung for full change ringing was installed for the Millennium.

Hailes Castle is a mainly 14th-century castle about 5 miles south west of Haddington. This castle, which has a fine riverside setting, belonged to the Hepburn family during the most important centuries of its existence. Since 1926, it has been the subject of a state-sponsored guardianship agreement, which is now under the auspices of Historic Scotland. It is open to the public without charge at all reasonable times.

At the end of March 2012, the town's library relocated to the John Gray Centre in Lodge Street, an extensively reconstructed and restored complex of historic buildings including the town's former granary. In addition to the lending library the Centre comprises East Lothian Council's Historical Archives, Local History Collections and Reading Room, a new museum of East Lothian (with a temporary exhibition gallery), a computer suite and community room. The Centre is named after a local minister whose bequest of books and money in 1717 gave the town one of the earliest community libraries in Scotland. 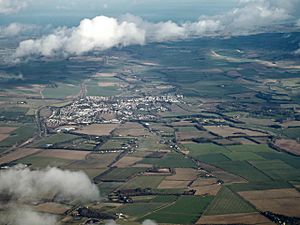 Haddington from the air

Haddington sits 1 km south of the A1 dual carriageway linking Edinburgh to London. The town is currently served by the bus companies Borders Buses, Prentice Coaches, Eve Coaches and East Coast Buses. These buses facilitate travel to Edinburgh, Berwick-upon-Tweed, and several other towns and villages in East Lothian. Since the withdrawal of many First Scotland East services in June 2012, the contracts for the 121 Haddington to North Berwick and the 123 Gifford Circle passed back to the Haddington-based firm Prentice Coaches. The nearest rail station is at Drem, four miles (six kilometres) to the north, which is served by regular Edinburgh to North Berwick trains. Haddington was once served by its own railway branch line which carried passengers for over a century from 1846 to 1949. There have been proposals to reopen or extend a railway line to Haddington to ease road congestion, but nothing has come to fruition in regards to this.

The Haddington railway line was a branch from the East Coast Main Line at Longniddry and terminated at Haddington railway station and freight depot in the area between West Road and Hospital Road. The line was 4 13⁄16 miles (7.7 kilometres) in length and had stations at Coatyburn Siding and Laverocklaw Siding before terminating in Haddington. The line was opened on 22 June 1846. The branch had only a single track, though bridges and embankments were built to allow for a double track. Passengers from Haddington were required to alight at Longniddry and change trains in order to travel to Edinburgh.

The Haddington branch line and station were damaged during the flood of 1948 and though both passenger and freight services were reinstated, British Rail opted to remove rail services to the public due to competition from bus services and dwindling passenger numbers. Passenger services ended on 29 December 1949. The use of the railway line for freight continued until March 1968. The larger Victorian station building was demolished; a smaller older building, parts of the platform structure, and embankment walls remain. These are recognisable by their distinctive red-brick appearance, and can be seen from West Road, Somnerfield Court, and the industrial area south of Hospital Road.

The land occupied by Haddington's railway line is owned by East Lothian Council and is used by walkers, cyclists and horse-riders in the section of the line between Longniddry station and the St Lawrence area of Haddington. The eastern terminus of the line is occupied by industrial units and scrub vegetation. A campaign to reopen Haddington's railway service is led by the group RAGES (Rail Action Group East of Scotland). Since the closure of the station in the 1940s (isolated as it then was at the western extremity of Haddington), the town has since expanded significantly. Between 1951 and 1981, the population of the town grew by 54%. It remains to be seen whether further expansion of the town will lead to a reinstatement of Haddington's railway line, since there are congestion issues on both the East Coast Main Line and at Edinburgh Waverley railway station.

Haddington is twinned with Aubigny-sur-Nère in France. 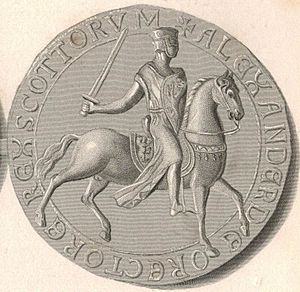 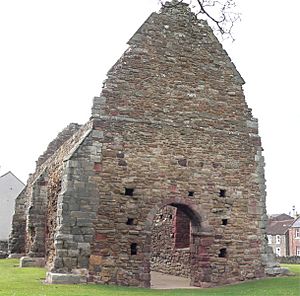 Blaeu's map of 1654 showing the area around Haddington. Other old maps exist made from the time of Timothy Pont onwards. 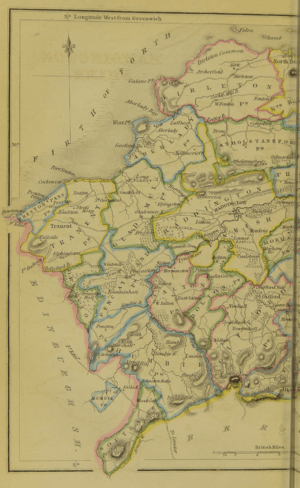 Haddington is located predominantly on the left bank of the River Tyne, and was once famous for its mills. It developed into the fourth-largest town in Scotland during the High Middle Ages, and later was at the centre of the mid-eighteenth century Scottish Agricultural Revolution.

In 1641, an Act was passed by the Parliament of Scotland to encourage the production of fine cloth, and in 1645 an amendment went through stating that the masters and workers of manufactories would be exempt from military service. As a result of this, more factories were established; these included the New Mills. This factory suffered during the Civil War with the loss of its cloth to General Monck. A new charter was drawn up in May 1681, and major capital invested in new machinery, but the New Mills had mixed fortunes, inevitably affected by the lack of protectionism for Scottish manufactured cloth. The Scots Courant reported in 1712 that New Mills was to be "rouped" (auctioned). The property was sold on 16 February 1713 and the machinery and plant on 20 March. The lands of New Mills were purchased by Colonel Francis Charteris and he changed their name to Amisfield. 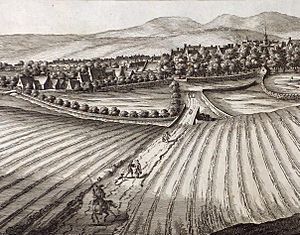 As the county town of East Lothian, Haddington is the seat of East Lothian Council with offices located at John Muir House behind Court Street. This building occupies the site of Haddington's twelfth century royal palace and adjoins the former Sheriff Court complex. The town centre is home to a wide range of independent retailers including: a bookshop, two sports shops, a saddlery and country goods specialist, two butchers, a hardware shop, cookware shop and several gift shops alongside several pubs, restaurants and cafés. Nationwide retailers with a presence in Haddington include: Tesco, M&Co, Boots, Aldi and Co-op Food. Besides retail and administration, the town is also home to various law firms and has industrial capacity in the works beside the Tyne at the Victoria Bridge (PureMalt), and around the site of the old station (Lemac), and various smaller industrial units and garages. Haddington is also home to the offices of the local newspaper the East Lothian Courier. There is a farmers' market held on the last Saturday of the month in Court Street.

Following the merger of Haddington Infant School and King's Meadow Primary School in 2018, Haddington has two state primary schools; the second being St. Mary's RC Primary School. Both are located adjacent to Neilson Park at the southern edge of the town centre. Prior to October 2012, Haddington Infant School was two separate buildings; the main building (built in 1897) and the annex (built in 1965) was located at Victoria Road/Meadowpark and the old St. Mary's Primary School was located at Tynebank Road. Following the discovery of structural defects at the old St Mary's RC Primary School in early-2009, the pupils temporarily attended makeshift classrooms at King's Meadow Primary School until the building was deemed safe again around mid-2009. In April 2011, East Lothian Council decided to build an entirely new school, because both schools would still be left with major problems even after substantial upgrades. A third primary school started construction at Letham Mains in April 2019, to serve the large number of new houses that have been built on the west side of the town from 2016 onwards. Secondary school pupils attend Knox Academy at Pencaitland Road. The Compass School, an independent fee-paying primary school and nursery, is located on the West Road.

Historically, the Burgh schools mostly had a good reputation, an exception being under Rev. William Whyte who retained his office despite reports of violence and even death due to his brutal discipline. Thomas Donaldson is recorded as being a Jacobite prisoner. 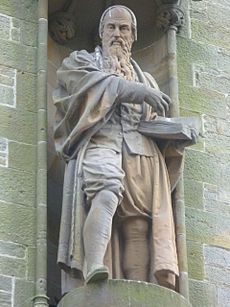 Freedom of the Burgh

People who have received the Freedom of the burgh of Haddington include:

All content from Kiddle encyclopedia articles (including the article images and facts) can be freely used under Attribution-ShareAlike license, unless stated otherwise. Cite this article:
Haddington, East Lothian Facts for Kids. Kiddle Encyclopedia.