Kids Encyclopedia Facts
This page is about a state park in North Carolina's Piedmont region. For other uses, see Hanging Rock.

On April 20, 1936, the Winston-Salem Foundation and the Stokes County Committee for Hanging Rock donated 3,096 acres (1,253 ha) to North Carolina for establishing a state park. Prior to this, the land had been owned by developers intent on creating a mountain resort on its highest summit. The plans fell through when the developers went bankrupt during the initial construction. After the state acquired the property, the Civilian Conservation Corps built the original facilities between 1935 and 1942, including the construction of a 12-acre (4.9 ha) lake and bathhouse that was listed on the National Register of Historic Places in 1991. Additional land acquisitions in the 1970s added to the park the Lower Cascades, a spectacular 40-foot (12 m) waterfall, and the Tory's Den, a rock outcropping rumored to have served as a hideout for British Loyalists during the American Revolutionary War. Another large land purchase in 2000 added Flat Shoals Mountain, a smaller summit visible from the top of Hanging Rock, to the park as well.

Named for the Saura Native Americans who were early inhabitants of the region, the rocky tops of the Sauratown Mountains are the remnants of a once-broad layer of rock that covered the region. Over many years, wind, water and other forces eroded the surrounding blanket of rock. What remains of these ancient mountains is the erosion-resistant quartzite, which now supports scenic ridges and knobs, including Moore's Knob, Moore's Wall, Cook's Wall, Devil's Chimney, Wolf Rock and Hanging Rock.

Due to its unique location, the park is home to a number of species of flora that are more commonly found in the westernmost part of the state. Carolina and Canadian hemlock grow alongside each other, and in the spring visitors can view the colorful displays of rhododendron, mountain laurel, pinxter azalea, and a number of other wildflowers. Much of the park is an oak-hickory forest, with chestnut oak the dominant hardwood.

The park is also home to the rare Wehrle's salamander, and peregrine falcons have been known to nest in the crags on the park's high peaks. Ravens and vultures may be seen calling and circling overhead. Visitors might see white-tailed deer and wild turkey while walking the park trails.

Two venomous snakes, the copperhead and timber rattlesnake, live in the park, but they do not bother unless provoked. All wildlife is protected at Hanging Rock just as in all other North Carolina State Parks.

Hanging Rock State Park offers over 18 miles (29 km) of trails where visitors can hike to its numerous peaks and waterfalls. The park has a 73-site tent and trailer campground (minus R/V hookups) and 10 vacation cabins for overnight accommodations. The lake and bathhouse, open from June – Labor Day, offers swimming and boat rentals. Rock climbing is permitted at Moore's Wall and Cook's Wall but is not allowed at the Hanging Rock summit. The visitor's center and museum room is open daily. There is no admission fee to the park.

The Mountains-to-Sea Trail pass through the park and joins with the Sauratown Trail. 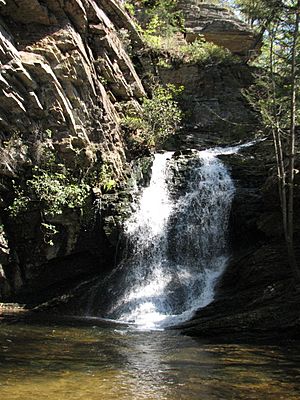 The park is the home to at least 5 significant waterfalls (listed in order of height):

The following state parks are within 30 miles (48 km) of Hanging Rock State Park:

All content from Kiddle encyclopedia articles (including the article images and facts) can be freely used under Attribution-ShareAlike license, unless stated otherwise. Cite this article:
Hanging Rock State Park Facts for Kids. Kiddle Encyclopedia.