Hanover is a town in Plymouth County, Massachusetts, United States. The population was 13,879 at the 2010 census.

The area of Hanover was first settled by English settlers in 1649 when William Barstow, a farmer, built a bridge along the North River at what is now Washington Street. The land was the westernmost portion of the town of Scituate, and it would officially separate and be incorporated as a town June 14, 1727. The name "Hanover" is probably a tribute to King George I, the first Hanoverian King of Great Britain. (While George I died on June 11, 1727, the reports would not have reached the colonies until after the town's incorporation.) Hanover's early industry revolved around farming, small mills and a shipbuilding area along the North River. Later industries would include tack factories and shoe factories along the smaller waterways in the town. The town was the site of the invention of the first tack-making machine, and making tacks and fireworks were among the industries of the later 19th century for Hanover. Today, Hanover is mostly residential. The Hanover Mall and other shops are located near the intersection of Routes 3 and 53. In 2007 Hanover American Legion Post 149 baseball team won the state title. In the Summer of 2012 - Hanover became home to the New England Football League (NEFL)'s newest expansion, Semi-Professional Football Team - The South Shore Chiefs. Home games are played at Hanover High School.

According to the United States Census Bureau, the town has a total area of 15.7 square miles (41 km2), of which 15.6 square miles (40 km2) is land and 0.1 square miles (0.26 km2), or 0.70%, is water. Hanover is the 240th town in terms of size in Massachusetts. Hanover is considered to be a part of the South Shore of Massachusetts. It is bordered by Norwell to the north and east, Pembroke and Hanson to the south, and Rockland to the west and northwest. Hanover is approximately 10 miles (16 km) east of Brockton and 20 miles (32 km) southeast of Boston.

Much of Hanover's eastern and southern borders consist of three waterways, the North and Indian Head rivers along the south and southeast, and the Third Herring Brook along the east. (The latter two are both tributaries, and the town border is marked by their confluences.) There are also several small ponds and brooks throughout the town, the largest pond being Factory Pond, a tributary of the Indian Head River in the south of town. The town has several small parks, sanctuaries and conservation areas spread throughout the town. 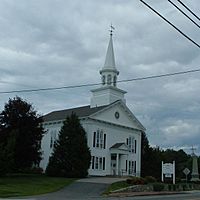 The First Congregational Church of Hanover in 2003. 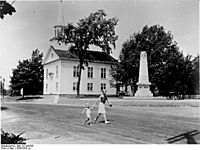 The First Congregational Church of Hanover in 1930

There were 4,350 households out of which 43.8% had children under the age of 18 living with them, 70.8% were married couples living together, 8.0% had a female householder with no husband present, and 18.0% were non-families. 15.2% of all households were made up of individuals and 8.8% have someone living alone who is 65 years of age or older. The average household size was 3.02 and the average family size was 3.39.

A short, three-mile portion of Massachusetts Route 3, a four-lane freeway, passes through the town, providing access via an exit at Route 53 in the northeast corner of town. The town's other major routes include Route 123 and Route 139, the latter passing through the town center. Routes 139 and 53 are coextensive for a stretch of one mile in the southeast corner of town.

The town has no rail or air service, though the town used to have rail service on the Hanover branch. The nearest rail service is the Kingston-Route 3 line of the MBTA's commuter rail service, which passes west of town, the closest stations being in Abington and Whitman. The nearest regional airport is Marshfield Municipal Airport, and the nearest national and international service can be reached at Logan International Airport in Boston. Seaplanes occasionally land in neighboring Hanson, on Lake Monponsett.

All content from Kiddle encyclopedia articles (including the article images and facts) can be freely used under Attribution-ShareAlike license, unless stated otherwise. Cite this article:
Hanover, Massachusetts Facts for Kids. Kiddle Encyclopedia.