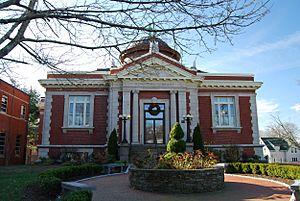 Rockland was settled by European settlers, as a northeastern region of neighboring Abington in 1673. The town separated and incorporated as Rockland on March 9, 1874. It is named for the town's rocky nature, which was better suited for mills and industry than for farming. During King Philip's War, the town was the site of an encampment during his raids on the town of Scituate.

During the twentieth century, the town was the site of a portion of the landing strips of the South Weymouth Naval Air Station. The airstrip closed in 1996 as a part of the fourth round of closures under the Base Realignment and Closure Act.

In recent years, a growing number of artists have moved into the community, attracted by former factory buildings as a place to work and meet.

A spur of the Old Colony rail line formerly ran through the town; that line is now abandoned. The Old Colony Line does, however, pass through neighboring Weymouth, Abington and Whitman, as part of the Kingston-Route 3 line of the MBTA's commuter rail. There are stops in South Weymouth (alongside the Naval Air Station) and Abington (just south of Route 123), not far from the town line. There is no commercial air service in town; nearby national and international flights are available at Logan International Airport in Boston, or T. F. Green Airport in Rhode Island.

There were over 9,000 households out of which 34.2% had children under the age of 18 living in them, 52.7% were married couples living together, 13.2% had a female householder with no husband present, and 29.9% were non-families. 24.9% of all households were made up of individuals and 9.8% had someone living alone who was 65 years of age or older. The average household size was 2.67 and the average family size was 3.23.

Lower Union Street Historic District runs down southern Union Street from East Water to Market Streets. In addition, there are several buildings on the National Register of Historic Places:

All content from Kiddle encyclopedia articles (including the article images and facts) can be freely used under Attribution-ShareAlike license, unless stated otherwise. Cite this article:
Rockland, Massachusetts Facts for Kids. Kiddle Encyclopedia.