Kids Encyclopedia Facts
Not to be confused with Norwell, Nottinghamshire.

Norwell is an affluent, semirural town in Plymouth County, Massachusetts, United States. The population was 10,506 at the 2010 Census. The town's southeastern border runs along the North River.

Norwell was first settled in 1634 as a part of the settlement of Satuit (later Scituate), which encompassed present-day Scituate and Norwell. It was officially created in 1849 and soon became known as South Scituate. The town changed its name by ballot to Norwell in 1888, after Henry Norwell, a dry goods merchant who provided funds for the maintenance of the town roads. Early settlers were attracted to Norwell for agricultural reasons, with the town later developing a major shipbuilding industry, based on the North and Northwest rivers. Shipbuilding was a major industry in the 18th through the early 19th centuries. Some of the finest frigates, schooners, whalers, and merchant vessels were produced in Norwell. The Norwell Village Area Historic District is in the center of the town.

Today, Norwell is an affluent residential community with over 10,000 residents that has modern schools, shopping, churches, libraries, health facilities, a wildlife preserve, and other support facilities as well as three industrial parks. 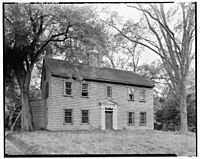 Much of Norwell's eastern border lies along the North River, where many shipbuilding companies once stood. There are many other brooks and ponds throughout the town, including Third Herring Brook, which constitutes much of the town's border with Hanover, Accord Pond at the junction of Norwell, Rockland and Hingham, and Jacobs Pond, along Route 123. The northern half of the town is hilly, and the southern end of Wompatuck State Park juts into the town.

There were 3,250 households out of which 42.2% had children under the age of 18 living with them, 74.6% were married couples living together, 6.5% had a female householder with no husband present, and 16.6% were non-families. 14.2% of all households were made up of individuals and 6.9% had someone living alone who was 65 years of age or older. The average household size was 2.94 and the average family size was 3.27.

Norwell has no rail or air service within the town. The nearest rail service is the Greenbush line of the MBTA's commuter rail in neighboring Scituate, just one mile from the Norwell town line. The nearest regional airport is Marshfield Municipal Airport; the nearest national and international service can be reached at Logan International Airport in Boston.

Norwell began construction of their "pathwalks" in the summer of 2015. These mixed use pedestrian and cycling paths were designed to connect the high school, middle school, and the town center. These pathwalks allow residents and students to travel without walking on the side of Norwell's busiest roads. The pathwalks stretch from South Street to the town center near the state police barracks.

All content from Kiddle encyclopedia articles (including the article images and facts) can be freely used under Attribution-ShareAlike license, unless stated otherwise. Cite this article:
Norwell, Massachusetts Facts for Kids. Kiddle Encyclopedia.