Hebron is a town in Oxford County, Maine, United States. Hebron is included in the Lewiston-Auburn, Maine metropolitan New England city and town area. The town's history has always been interconnected with Hebron Academy, a co-ed college preparatory boarding school which is located in the town's heart. The population was 1,416 at the 2010 census. There is an elementary school, Hebron Station School, located on Station Road.

It was granted on March 8, 1777 by the Massachusetts General Court to Alexander Shepard, Jr. of Newton, Massachusetts as payment for a survey chart of the Maine coast that he had assisted making. It was named Shepardsfield Plantation, although early inhabitants called it Bog Brook Plantation. The first settlers were Captain Daniel Buckman and his family in 1778. Others followed, many fresh from the battlefields of the Revolutionary War. On February 27, 1829, Hebron's southwestern half was set off and incorporated as the town of Oxford.

Agriculture was the principal occupation, with hay the chief crop. In addition, the town had fine orchards. The outlet of Marshall Pond, the largest body of water, provided power for mills. There was a sawmill, shingle mill, pail factory, blacksmith shop and shoe shop. In 1804, Deacon William Barrows, Jr. was instrumental in founding Hebron Academy. The town would be crossed by the Rumford Falls and Buckfield Railroad. The Western Maine Sanatorium opened at Hebron in 1904, the first of its kind in the state. It treated tuberculosis patients with rest, fresh air and a healthy diet. Taken over by the state in 1915, it closed in 1959.

The town is crossed by Maine State Route 119. It borders the towns of Buckfield to the north, Oxford to the south, Paris to the west, and Turner and Minot to the east.

Hebron Maine is known for the Rubellite Tourmaline found on Mt. Rubellite in Hebron Center. 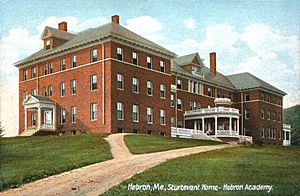 There were 449 households, of which 38.1% had children under the age of 18 living with them, 59.5% were married couples living together, 9.6% had a female householder with no husband present, 7.3% had a male householder with no wife present, and 23.6% were non-families. 15.6% of all households were made up of individuals, and 3.5% had someone living alone who was 65 years of age or older. The average household size was 2.76 and the average family size was 3.05.

All content from Kiddle encyclopedia articles (including the article images and facts) can be freely used under Attribution-ShareAlike license, unless stated otherwise. Cite this article:
Hebron, Maine Facts for Kids. Kiddle Encyclopedia.