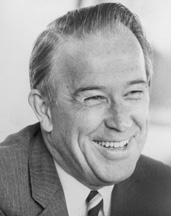 He ran for President of the United States during the presidential elections in 1976, but lost to Jimmy Carter during the primary.

Jackson died in Everett, Washington from an aortic aneurysm, aged 71.

All content from Kiddle encyclopedia articles (including the article images and facts) can be freely used under Attribution-ShareAlike license, unless stated otherwise. Cite this article:
Henry M. Jackson Facts for Kids. Kiddle Encyclopedia.