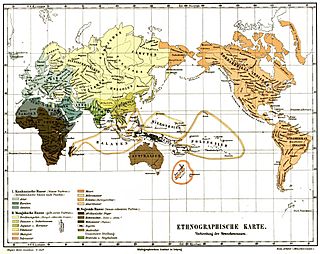 Some scientists spoke of three races of mankind: The Caucasian race living in Europe, North Africa and West Asia, the Mongoloid race living in East Asia, Australia, and the Americas, and the Negroid race living in Africa south of the Sahara. Other scientists had different ideas and spoke of four or five races. These ideas were popular from the late 18th century to the middle of the 20th century. Because these ideas belong to former times, they are called historical definitions of race or historical race concepts.

Today, scientists agree that there is only one human race. Modern genetic research has shown that the idea of three (or four, or five) races was wrong.

Johann Friedrich Blumenbach's classification, first proposed in 1779, was widely used in the 19th century, with many variations.

Middle of the 20th century 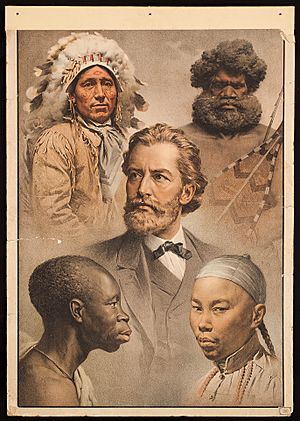 The Five Races of Man, an illustration from 1911. White scientists invented ideas of races because they wanted to be superior.

There was much prejudice based upon this way of looking at the world. The Europeans and Asians both regarded themselves as superior to the other skin colors. Racism, a non-scientific theory or ideology, was that a particular race was superior or inferior. It argued that in the races that make up the human race, there are deep, biologically determined differences. It also states races should live separately and not intermarry. A supporter of racism is called a racist. These attitudes in turn supported the horrors of African slavery, Apartheid, the Jim Crow laws, Nazism and Japanese imperialism.

All content from Kiddle encyclopedia articles (including the article images and facts) can be freely used under Attribution-ShareAlike license, unless stated otherwise. Cite this article:
Historical definitions of race Facts for Kids. Kiddle Encyclopedia.