Keller is a suburban city in Tarrant County, Texas in the Dallas–Fort Worth metroplex. Keller advertises itself as "successfully balancing big-city comforts with small-town charm." The city has a population density of 2,200 people per square mile and land accompanied by its town hall, municipal service center, and recreation and aquatic center. According to the 2010 census, the city's population is 39,627, making Keller the 74th most populated city in Texas.

In the early 1850s, settlers established Keller and the town became a stop on the Texas and Pacific Railway. The settlers settled around the wooded region in Keller, because of Keller’s location to the Trinity River, water supply, and land. On November 16, 1955, Keller became incorporated.

Keller is mostly residential, featuring more than 300 acres (120 ha) of developed land for 11 park sites and 23 miles of hiking and biking trails. [1] The Keller Independent School District has 39 campuses serving more than 34,000 students. [2]

Keller is in the western fringe of the Eastern Cross Timbers in north Tarrant County comprised part of the frontier of the Peters Colony settlers of the 1840s. In about 1845, the area was first settled by a group of families from Missouri that homesteaded near the head-waters of Big Bear Creek. Mount Gilead Baptist Church was established on July 13, 1850. In 1859 the little log church was burned in an Indian raid. It served as the only schoolhouse in that part of the county until about 1910. 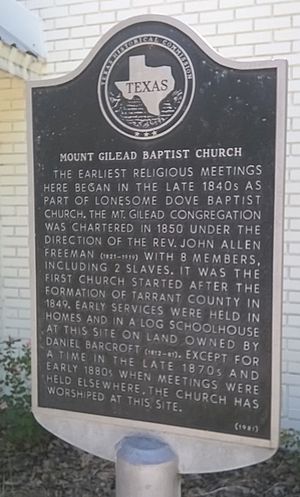 The area became known as ‘Double Spring’ for the two large springs approximately ½ mile north of Mt. Gilead Baptist Church. In the early 1870s, the Double Springs area had a cotton gin, a grist mill, a blacksmith shop and several stores. John C. Keller established the site for the railroad depot and in 1896 an artesian well was drilled in Keller; the Double Springs filled with silt over time and eventually were plugged and lost until rediscovery in 1984. Today ‘Samantha Springs,’ produces more than 200,000 gallons of water per day.

The Texas and Pacific Railway between Fort Worth and Texarkana was completed in June 1881, and the first train ran on this track on May 9, 1881. With the advent of rail service, new villages were established all along the line. The Keller of today was one of them. On July 19, 1881, H.W. Black, a druggist of Tarrant County, set aside 40 acres (0.16 km2) out of the north end of the 62 acres (0.25 km2) deeded to him by A.C. Roberts (being a part of the Samuel Needham Survey) for a town site to be known as Athol, situated 14 miles (23 km) northeast of Fort Worth. The land was dedicated to the public for streets and alleyways, but title to the remainder of the 62 acres (0.25 km2) was held by Mr. Black. Settlers migrated to the new village, and before a year had passed the name of the town was changed from Athol to Keller, honoring John C. Keller, a foreman on the railroad. Streets were named and those in the original 40-acre (0.16 km2) site still carry the names given to them in 1881. Streets going north and south are Lamar, Main and Elm; those running east and west are Price, Taylor, Hill, Vine, Bates, Olive and Pecan.

Here is the list of cities surrounding The City of Keller, whom which are located in either Denton or Tarrant County.

The climate in this area is characterized by hot, humid summers and generally mild to cool winters. According to the Köppen Climate Classification system, Keller has a humid subtropical climate, abbreviated "Cfa" on climate maps.

There were 8,827 households out of which 52.4% had children under the age of 18 living with them, 81.3% were married couples living together, 5.6% had a female householder with no husband present, and 11.0% were non-families. 8.9% of all households were made up of individuals and 2.0% had someone living alone who was 65 years of age or older. The average household size was 3.09 and the average family size was 3.30.

All content from Kiddle encyclopedia articles (including the article images and facts) can be freely used under Attribution-ShareAlike license, unless stated otherwise. Cite this article:
Keller, Texas Facts for Kids. Kiddle Encyclopedia.