Landes (Gascon: Lanas) is a department in the Nouvelle-Aquitaine region of France. Landes is the plural of the French word lande (in English:heathland); it was named so because it was the most common habitat in the region.

It is well known for the Côte d'Argent beach that attracts many surfers to Mimizan and Hossegor each year.

The department was formed during the French Revolution on 4 March 1790 with parts of the old provinces of Guyenne and Gascony. It was divided into four districts: Dax, Mont-de-Marsan, Saint-Sever and Tartas. The capital was Mont-de-Marsan.

Landes is part of the Nouvelle-Aquitaine region, southwestern France, and is, after Gironde, the second largest department of Metropolitan France with an area of 9,242.6 km2 (3,569 sq mi).

The department is bordered to the west by the Atlantic Ocean, to the north by the Gironde, to the northeast by Lot-et-Garonne and the south by the Pyrénées-Atlantiques; these three departments are, like Landes, of the Nouvelle-Aquitaine region. To the east, it borders with the Gers department of the Occitanie region.

The most important river is the Adour, which crosses the southern part of the department in an east-west direction; in Dax, the river turns to the southwest and is joined by the Gaves réunis before flowing into the Atlantic Ocean.

The forest of Landes is the largest forest in France. It covers about 67% of the department in its northern part, and also covers a large part of the Gironde and Lot-et-Garonne (arrondissement of Nérac). The main species of tree is the maritime pine (Pinus pinaster).

The department is managed by the Departmental Council of the Landes in Mont-de-Marsan.

There are 2 arrondissements (districts), 15 cantons and 330 communes (municipalities) in Landes.

The following is a list of the 15 cantons of the Landes department (with their INSEE codes), following the French canton reorganisation which came into effect in March 2015:

The inhabitants of Landes are known, in French, as Landais (women: Landaises).

Evolution of the population in Landes 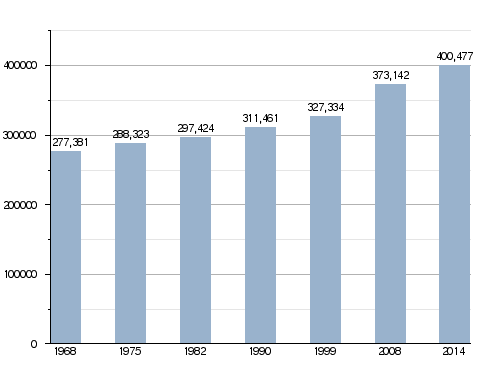 All content from Kiddle encyclopedia articles (including the article images and facts) can be freely used under Attribution-ShareAlike license, unless stated otherwise. Cite this article:
Landes Facts for Kids. Kiddle Encyclopedia.