Lee de Forest (August 26, 1873 – June 30, 1961) was an American inventor, self-described "Father of Radio", and a pioneer in the development of sound-on-film recording used for motion pictures. He had over 180 patents, but also a tumultuous career—he boasted that he made, then lost, four fortunes. He was also involved in several major patent lawsuits, spent a substantial part of his income on legal bills, and was even tried (and acquitted) for mail fraud. His most famous invention, in 1906, was the three-element "Audion" (triode) vacuum tube, the first practical amplification device. Although De Forest had only a limited understanding of how it worked, it was the foundation of the field of electronics, making possible radio broadcasting, long distance telephone lines, and talking motion pictures, among countless other applications. 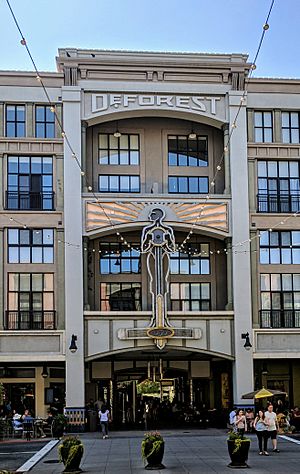 The DeForest Lofts at Santana Row, San Jose, California, are in this building named for Lee de Forest.

The grid Audion, which de Forest called "my greatest invention", and the vacuum tubes developed from it, dominated the field of electronics for forty years, making possible long-distance telephone service, radio broadcasting, television, and many other applications. It could also be used as an electronic switching element, and was later used in early digital electronics, including the first electronic computers, although the 1948 invention of the transistor would lead to microchips that eventually supplanted vacuum-tube technology. For this reason de Forest has been called one of the founders of the "electronic age".

De Forest's archives were donated by his widow to the Perham Electronic Foundation, which in 1973 opened the Foothills Electronics Museum at Foothill College in Los Altos, California. In 1991 the college closed the museum, breaking its contract. The foundation won a lawsuit and was awarded $775,000. The holdings were placed in storage for twelve years, before being acquired in 2003 by History San José and put on display as The Perham Collection of Early Electronics. 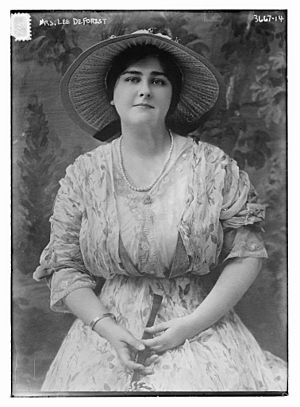 All content from Kiddle encyclopedia articles (including the article images and facts) can be freely used under Attribution-ShareAlike license, unless stated otherwise. Cite this article:
Lee de Forest Facts for Kids. Kiddle Encyclopedia.