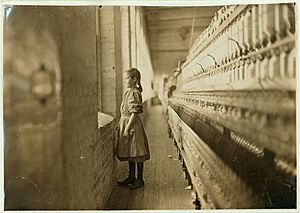 This area was long occupied by varying cultures of indigenous peoples. It was not settled extensively by European Americans until after the American Revolutionary War of the late 18th century.

In June 1780 during the war, the future site of Lincolnton was the site of the Battle of Ramsour's Mill, a small engagement in which local Loyalists were defeated by pro-independence forces among the British colonists. Some historians consider the battle significant because it disrupted Loyalist organizing in the region at a crucial time.

After the Revolution, the legislature organized a new county by splitting this area from old Tryon County (named in the colonial era for a royally appointed governor). The 1780 battle site was chosen for the seat of Lincoln County. The new city and the county were named for Major General Benjamin Lincoln, who served in the Continental Army during the Revolutionary War.

The Piedmont area was developed for industry, based on using the water power of the fall line. With the advantage of the Catawba River, Lincolnton was the site of the first textile mill built in North Carolina, constructed by Michael Schenck in 1813. It was the first cotton mill built south of the Potomac River. Cotton processing became a major industry in the area. St. Luke's Episcopal Church was founded in 1841.

As county seat and a center of the textile industry, city residents prospered on the returns from cotton cultivation. The city has numerous properties, including churches, which have been listed on the National Register of Historic Places since the late 20th century. It has three recognized historic districts: Lincolnton Commercial Historic District, South Aspen Street Historic District, and West Main Street Historic District. These were centers of the earliest businesses and retail activities. There was much activity around the Lincoln County Courthouse on court days, when farmers typically came to town to trade and sell their goods.

In 1986, Lincolnton expanded by annexing the town of Boger City.

The city has grown since 1980 as part of the Charlotte metropolitan area expansion.

All content from Kiddle encyclopedia articles (including the article images and facts) can be freely used under Attribution-ShareAlike license, unless stated otherwise. Cite this article:
Lincolnton, North Carolina Facts for Kids. Kiddle Encyclopedia.