List of counties of New Brunswick facts for kids 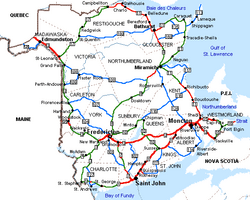 This is a list of the counties in the Canadian province of New Brunswick, with population and county seats (known in the province as shire towns).

Before New Brunswick was split from Nova Scotia, it was made up of Cumberland and Sunbury Counties. Counties were at the top of a three-layer local government system. Below each county were parishes (townships), Some, but not all, parishes were then further subdivided into municipalities. The exception to this was the municipality of Saint John which was not in a parish but was a sub-division of Saint John County.

With the New Brunswick Equal Opportunity program in 1966, county councils were shut down. Counties continue to be used as an organizational unit, along with parishes, for registration of real-estate and its taxation. They figure prominently in residents' sense of place and continue as significant threads in the Province's culture (i.e., most citizens always know which county they are in). They still appear on most maps.

All content from Kiddle encyclopedia articles (including the article images and facts) can be freely used under Attribution-ShareAlike license, unless stated otherwise. Cite this article:
List of counties of New Brunswick Facts for Kids. Kiddle Encyclopedia.