List of non-native birds in Great Britain facts for kids

Escaped birds of certain species, e.g. ruddy shelduck, can cause confusion amongst birdwatchers as they occasionally occur in Britain as wild birds.

The following species have established colonies in the UK at some point in time. They may have since died out, or new colonies established elsewhere. 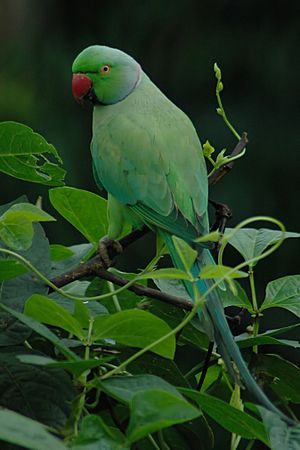 Ring-necked parakeets are now very numerous in places such as the home counties. 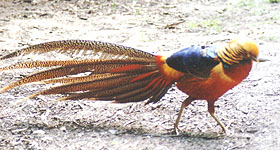 Golden pheasant are one of many game birds introduced for sport and ornamental purposes.

In addition to the species listed below, almost any bird kept in captivity (especially wildfowl) may escape and their origins may not always be obvious. Excluding the likelihood of captive origin is a major hurdle to be faced by the British Birds Rarities Committee when assessing reports of rare and vagrant species to Britain.

All content from Kiddle encyclopedia articles (including the article images and facts) can be freely used under Attribution-ShareAlike license, unless stated otherwise. Cite this article:
List of non-native birds in Great Britain Facts for Kids. Kiddle Encyclopedia.