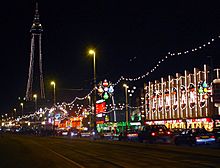 The Blackpool Illuminations is an annual lights festival, founded in 1879 and held each autumn in the English seaside resort of Blackpool on the Fylde Coast in Lancashire. In 1934 the town began a tradition of marking the start of the festival by inviting a public figure to perform the inaugural switch on of the lights. For the first public switch on ceremony, the honour was performed by Lord Derby. In subsequent years invitees have predominantly been drawn from the world of entertainment with occasional appearances by sportspeople and political figures. The illuminations have also been turned on by a bomber aircraft and a racehorse.

The 2019 switch-on was performed by actress Lucy Fallon.

All content from Kiddle encyclopedia articles (including the article images and facts) can be freely used under Attribution-ShareAlike license, unless stated otherwise. Cite this article:
List of people who have switched on the Blackpool Illuminations Facts for Kids. Kiddle Encyclopedia.