Loddon is a small market town and electoral ward about 12 miles (19 km) southeast of Norwich on the River Chet, a tributary of the River Yare within The Broads in Norfolk, England. The name "Loddon" is thought to mean muddy river in Celtic in reference to the Chet.

The earliest written mention of Loddon (Lodne) is in the will of Ælfric Modercope written in 1042 or 1043. In the will Ælfric split his land holdings in Loddon, Bergh Apton and Barton between the Bishops of Bury, Ely and St Benet of Holme. Ælfric held 450 acres (1.8 km2) of land in Loddon and was by far the biggest landowner. His manor house is believed to have been close by the church overlooking the river and the fields are known as Manor Yards.

The Parish Council adopted Ælfric for Loddon's town sign in 1961 and the bronze statue still stands on Farthing Green.

Although Loddon and Chedgrave have been flooded many times through history, the worst or at least the best documented occasions were in August 1912 and September 1968.

At about midnight on 27 August 1912 a portion of the roadway was washed away and soon afterwards part of the bridge caved in. The footbridge across the river between the two industrial sites disappeared downstream. The mill was in great jeopardy and forty men worked hard to preserve as much of the road as possible. The piling and the banks of the Chet were washed away and some of the wherries broke their moorings.

On 12 September 1968 a great storm followed a very wet summer, so when the heavy rain came that night the ground was too waterlogged to let the rain drain away. According to the Eastern Daily Press it had been Norfolk's wettest ever September day. The torrential rain was accompanied by thunder and lightning and many roads were inches deep in water.

Loddon has many fine buildings; from the 15th-century parish church of Holy Trinity, through the 18th-century "Loddon House" (originally a mental institution), to "Farthing Green House", which is a good example of Georgian architecture. 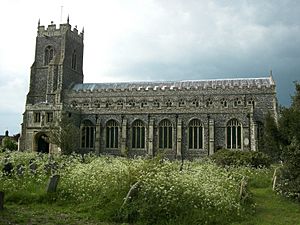 The town centre of Loddon, a designated conservation area, is dominated by the Holy Trinity Church dates from 1490 by Sir James Hobart who lived at Hales Hall, and was Attorney General to King Henry VII. The outside of the building is faced with flintwork and the interior contains a hammerbeam roof, Jacobean pulpit, early Edwardian pews with carved poppy-head ends, several table-top tombs, an ancient poor-box and a panel on the painted rood screen which shows William of Norwich, a boy martyr who is reputed to have been crucified in the 12th century. There is also a medieval baptismal font set high on three steps, however despite its shaft and bowl were originally carved and painted, they were defaced during periods of iconoclasm.

The church is said to have possibly replaced an earlier Norman church and an even older one built by St Felix, Bishop of East Anglia, about 630.

There was a mill mentioned at Loddon in the Domesday Book and a watermill at Chedgrave in the early 1330s, but there is no evidence for the sites of these mills. The present mill, Loddon watermill near the town centre which is no longer functioning, was built in the 18th century with the river diverted to run underneath it. Loddon watermill was sometimes known as Chedgrave mill and is one of the earliest recorded buildings in the town. It was built of weatherboard with a pantiled roof and was situated quite close to the centre of the town. The mill pool was never very big, but was apparently a widened and deepened Y shaped section of river up stream of the mill. This produced adequate power for the miller to meet the needs of the local farmers and villagers. The mill still retains 19th-century milling equipment.

When the mill was built it was found that the best position for it involved diverting the river Chet to the south of its natural course. This involved considerable effort and expense and in times of severe flood the river attempts to revert to its original channel.

According to the indenture dated 25 January 1870 James Cole Copeman conveyed to The Loddon Town Hall Company (Limited), for the sum for £30, the site on which to build the Town Hall. The actual building of the Town Hall must have been started before the conveyance was drawn up because the Petty Sessions were held in the Town Hall for the first time on Wednesday 10 August 1870.

The red brick building was very ornate, as was the style of many Victorian architects. The oldest photograph available shows much fancy brickwork and ornamentation. A great deal of this has succumbed to time and either fallen or been removed for safety. However, the 'Elizabethan style' windows are virtually intact. The building is on the buildings at risk register.

There are many shops and services in central Loddon. These include; a tearoom, a co-op food store, two newsagents, two butchers, various take-aways such as a fish and chip shop and a Chinese take-away, plus an award-winning Bangladeshi restaurant. There is also a movie rental store, a beauty salon, two estate agents, a chemist, a doctor, a garden shop, a veterinarian, a bank, a post office, a dentist, a library, a charity shop, a baby shop, an optician and a hardware store. There are three public houses in central Loddon: The Angel, The Swan and The King's Head. The Swan has recently reopened. Loddon Water mill is now a complementary health practice. 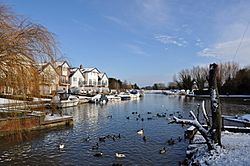 Today the River Chet is one of the focal points for boating tourism within the southern Broads area and is the only such centre within South Norfolk District.

Village of the Year

In 2005, Loddon was chosen to represent Norfolk in the National Calor Village of the Year Competition. In December 2005 representatives from Loddon, including local business woman Caroline Dwen and Lady Kate Hartland, went to London to the National Presentation Ceremony where the town had won the first prize for the East Region.

The Broads system of waterways is connected to the River Chet and mooring is available to the east of the town.

All content from Kiddle encyclopedia articles (including the article images and facts) can be freely used under Attribution-ShareAlike license, unless stated otherwise. Cite this article:
Loddon, Norfolk Facts for Kids. Kiddle Encyclopedia.