Kids Encyclopedia Facts
(Redirected from Manchester, Massachusetts)
For the American drama film set in and named after the town, see Manchester by the Sea (film).

Manchester-by-the-Sea (or simply Manchester) is a town on Cape Ann, in Essex County, Massachusetts, in the United States. The town is known for scenic beaches and vista points. At the 2010 census, the town population was 5,136. 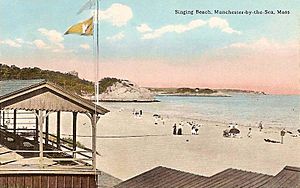 Manchester was first settled by Europeans in 1629 and was officially incorporated in 1645. It was formed out of territory taken from Salem (that portion since given to Beverly) and Gloucester.

The community thrived primarily as a fishing community for over 200 years. Its economy shifted to that of a Boston area summer colony starting in 1845, when Richard Dana, a Boston-based poet, built a house in the town. Over the next fifty years, development of summer houses along the coastline established the community as Boston society's community of choice for summer residency. The trend continued with designs by other notable architects, such as "Sunny Waters", designed by John Hubbard Sturgis for his older brother, Russell, in 1862.

The most famous of these "summer cottages" was Kragsyde, built on Smith's Point in 1883 and demolished in 1929. Commissioned by George Nixon Black, the Peabody and Stearns-designed residence has been hailed as the zenith of the Shingle style substyle of the Queen Anne style of architecture.

To prevent confusion with the nearby and much larger city of Manchester, New Hampshire, the name of the town was officially changed in 1989 following a close town meeting vote that year and an act of the state legislature passed on September 25, 1989.

The name change was driven by Edward Corley, a longtime resident of Manchester. All town documents, and the town seal, now use the name "Manchester-by-the-Sea", and as a result of some minor resident activism, so do the majority of public and private lists of Massachusetts cities and towns, including that of the state government.

According to the United States Census Bureau, the town has a total area of 18.3 square miles (47.3 km2), of which 9.2 square miles (23.9 km2) is land and 9.0 square miles (23.4 km2), or 49.47%, is water. The town lies along the North Shore of Massachusetts Bay, which in turn leads to the Atlantic Ocean. There are seven beaches lining the coast, and several small islands dot the coast, the largest being Kettle Island and House Island.

Manchester-by-the-Sea is bordered by Beverly and Wenham to the west, Hamilton to the northwest, Essex to the north, and Gloucester to the east. The town is located 9 miles (14 km) northeast of Salem and 24 miles (39 km) northeast of Boston. Manchester-by-the-Sea lies along Massachusetts Route 128, which has two exits within town as it passes from Beverly to Gloucester, with a small portion crossing through the corner of Essex. Route 127 also passes from west to east through town, traveling through the center of town. There is no bus service directly into town, with service passing east via the Cape Ann Transportation Authority in Gloucester and MBTA Bus, which provides service to Beverly.

The town is served by a stop along the Newburyport/Rockport Line of the MBTA Commuter Rail, providing service from Rockport along the North Shore to Boston's North Station. The nearest airport is the Beverly Municipal Airport, with the nearest national and international service at Boston's Logan International Airport.

There were 2,147 households out of which 29.5% had children under the age of 18 living with them, 56.6% were married couples living together, 8.4% had a female householder with no husband present, and 32.7% were non-families. 28.8% of all households were made up of individuals and 13.7% had someone living alone who was 65 years of age or older. The average household size was 2.39 and the average family size was 2.96.

One mile from the town center is Singing Beach, so named because the sand comprising the beach squeaks when walked upon (see Singing sand). This beach is quite popular during summer months in particular because it is easily accessible from Boston by a half-mile walk from the MBTA train station. Also located on this historic beach is the famous tourist attraction "Eaglehead", a rock composite that is the focal point of rock climbing and other recreation activities.

All content from Kiddle encyclopedia articles (including the article images and facts) can be freely used under Attribution-ShareAlike license, unless stated otherwise. Cite this article:
Manchester-by-the-Sea, Massachusetts Facts for Kids. Kiddle Encyclopedia.