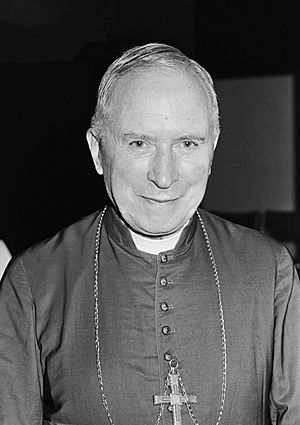 Marcel-François Lefebvre (November 29 1905 – March 25 1991), better known as Archbishop Marcel Lefebvre, was a French Roman Catholic bishop. For a long time, he worked as a missionary in Africa with the Holy Ghost Fathers. After returning, he started to be against the changes within the Church. These changes were introduced after the Second Vatican Council.

In 1970, Lefebvre founded the Society of St. Pius X (SSPX), which is still the world's largest Traditionalist Catholic priestly society. In 1988, Lefebvre made four new bishops to continue his work with the SSPX. He took this step against the orders of Pope John Paul II. Because of this, the Holy See announced the following day that he had been excommunicated from the Catholic Church. Those who supported Lefebvre think, this declaration was not valid.

All content from Kiddle encyclopedia articles (including the article images and facts) can be freely used under Attribution-ShareAlike license, unless stated otherwise. Cite this article:
Marcel Lefebvre Facts for Kids. Kiddle Encyclopedia.