The Mexican War of Independence (1810–1821) was a war between the people of Mexico and the Spanish colonial government. It started on 16 September 1810. It was started by Mexican-born Spaniards (criollo people), Mestizos and Amerindians who wanted independence from Spain.

The idea of a Mexican independence goes back to the years after the Spanish conquest of the Aztec Empire. Martín Cortés led a revolt against the Spanish colonial government.

After the plot called the Conspiracy of the Machetes was not successful in 1799, the War of Independence really started with the Grito de Dolores in 1810 when Spain was fighting against its French invaders

Beginning of the War

Miguel Hidalgo y Costilla, was a Mexican priest and member of a group of educated Criollos in Querétaro. They met in tertulias (salons), and decided in 1810 that a revolt against the colonial government was needed, because of the results of the Peninsular War. Hidalgo worked closely with Ignacio de Allende, a nobleman with military training, the plan was for a battle in December 1810.

They were betrayed by a member of the group. Hidalgo then turned to his parishioners in the town of Dolores. Around 6:00 am of September 16, 1810 he declared independence from the Spanish crown, and war against the government in what was known as the Grito de Dolores. The revolutionary army decided to fight for independence. They marched on to Guanajuato, which was a major colonial mining centre governed by Spaniards and criollos.

There, the leaders of this "citizens army", which was more like an unorganised mob, locked themselves in the granary (place for storing grain). They killed most of the much hated Spaniards and Criollos that were there. This also included high-ranking nobles and supporters of the fight for Independence. This caused Hidalgo and Allende to fight with each other. After that, Allende did not want to fight alongside Hidalgo, and left with his soldiers.

On October 30, Miguel Hidalgo's army fought the Spanish resistance at the Battle of Monte de las Cruces. They won this battle. 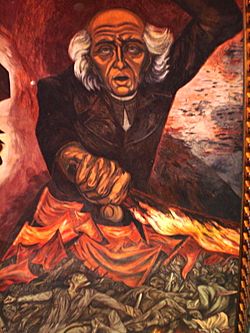 In January 1811, Spanish forces fought the Battle of the Bridge of Calderón and the peasant army lost. It made the rebels flee towards the United States-Mexican border, where they hoped to escape. However they were caught by the Spanish army.

Hidalgo and what was left of his army were caught in the state of Coahuila at the Wells of Baján. He had a trial done by the Inquisition on 30 July 1811. He was executed.

After the death of Father Hidalgo, the leadership of the revolutionary army was taken over by José María Morelos. Under his leadership the cities of Oaxaca and Acapulco were taken. In 1813, the Congress of Chilpancingo had their first meeting. On 6 November of that year, the Congress signed the first official document of independence, known as the "Solemn Act of the Declaration of Independence of Northern America". It was followed by a long war at the Siege of Cuautla. In 1815, Morelos was caught by Spanish colonial authorities. He was put on trial and executed for treason in San Cristóbal Ecatepec on 22 December. 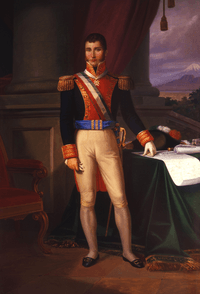 Oil painting of Agustín de Iturbide, leader of independence who was declared Emperor Augustín I, in 1822 following independence 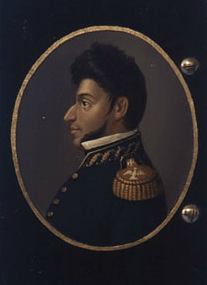 By the early 1820's the independence movement was close to collapsing. Two of their main leaders were executed, and the rebels found it hard to fight the well-organized Spanish military. Also, many of the most influential criollos did not care any more. The violence of Hidalgo's and Morelos's unorganised army mob was not liked. They wanted a better, less bloody way to get independence.

In December 1820, Viceroy Juan Ruiz de Apodaca sent a force led by a royalist criollo officer, Colonel Agustín de Iturbide, to fight in Oaxaca. Iturbide was famous for the way in which he went after Hidalgo's and Morelos's rebels during the early independence struggle.

The fight at Oaxaca came at the same time as successful coup (a fight by the military against the government) in Spain against the monarchy of Ferdinand VII. Ferdinand was forced to reinstate the liberal Spanish Constitution of 1812. When this news reached Mexico, Iturbide saw it as an opportunity for the criollos to gain control of Mexico. After first clashing with Guerrero's forces, Iturbide switched sides. He invited the rebel leader to meet and discuss a new independence struggle.

While in the town of Iguala, Iturbide created three rules, or "guarantees," for Mexican independence from Spain.

He made his troops accept these rules. They are known as the Plan of Iguala. Iturbide then persuaded Guerrero to join his forces in support of the new independence. A new army, the Army of the Three Guarantees, was then placed under Iturbide's command to enforce the Plan of Iguala. The plan was so broad that it pleased both patriots and loyalists. The goal of independence and the protection of Roman Catholicism brought together all factions.

Iturbide's army was joined by rebel forces from all over Mexico. When the rebels' victory became certain, the viceroy resigned. On August 24, 1821, representatives of the Spanish crown and Iturbide signed the Treaty of Córdoba. This recognized Mexican independence under the terms of the Plan of Iguala.

On September 27 the Army of the Three Guarantees entered Mexico City. The next day Iturbide proclaimed the independence of the Mexican Empire.

On the night of the May 18, 1822, a mass of people marched through the streets. They demanded that their commander-in-chief Iturbide accept the throne. The next day, the congress declared Iturbide emperor of Mexico.

All content from Kiddle encyclopedia articles (including the article images and facts) can be freely used under Attribution-ShareAlike license, unless stated otherwise. Cite this article:
Mexican War of Independence Facts for Kids. Kiddle Encyclopedia.