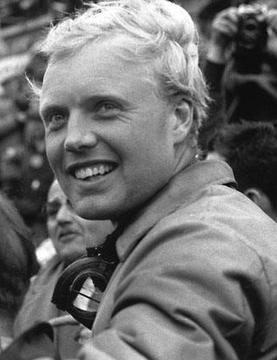 John Michael Hawthorn (10 April 1929 – 22 January 1959) was a British racing driver. He became the United Kingdom's first Formula One World Champion driver in 1958, whereupon he announced his retirement, having been profoundly affected by the death of his teammate and friend Peter Collins two months earlier in the 1958 German Grand Prix. Hawthorn also won the 1955 24 Hours of Le Mans, but was haunted by his involvement in the disastrous crash that marred the race. Hawthorn died in a road accident six months after retiring; he was allegedly suffering from a terminal illness at the time.

All content from Kiddle encyclopedia articles (including the article images and facts) can be freely used under Attribution-ShareAlike license, unless stated otherwise. Cite this article:
Mike Hawthorn Facts for Kids. Kiddle Encyclopedia.