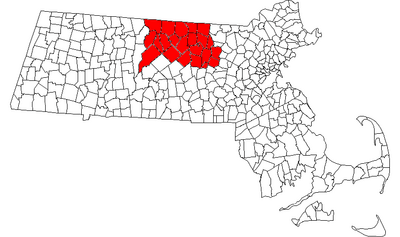 The Massachusetts Region (also known as North County) is a region comprising several cities and towns in the north-central area of Massachusetts surrounding Fitchburg. As it has no legal standing in state government, definitions of the region vary.

The terms, which are used interchangeably, are usually understood to refer to the area economically tied with the cities of Gardner, Fitchburg and Leominster. The "North County" label—the county referred to is Worcester County—is often used to emphasize the area's distance and separate political identity from the county seat at Worcester.

The region is sometimes defined as including Fitchburg suburbs in the northwestern corner of Middlesex County, Massachusetts. The region's leading daily newspaper, the Sentinel & Enterprise, is published in Fitchburg. Another, the Telegram & Gazette of Worcester, publishes a "North County" daily edition and Massachusetts T&G semiweekly insert, both of which cover most of the areas usually considered parts of the North County and Massachusetts regions.

Massachusetts–North County towns include (towns in Middlesex County marked with *):

All content from Kiddle encyclopedia articles (including the article images and facts) can be freely used under Attribution-ShareAlike license, unless stated otherwise. Cite this article:
Montachusett-North County Facts for Kids. Kiddle Encyclopedia.