Moortown is a suburb of Leeds, West Yorkshire, England in the LS17 postcode district. It is a civil parish and sits in the Moortown ward of Leeds City Council in the north east of the city.

It is situated between Roundhay and Gledhow on the east and Weetwood on the west, with Chapel Allerton to the south, and Alwoodley to the north. It is synonymous with Moor Allerton, and institutions in the area use both names. Moortown lies in the LS17 postcode district, which was reported to contain the most expensive housing area in Yorkshire and the Humber by The Times in 2007. 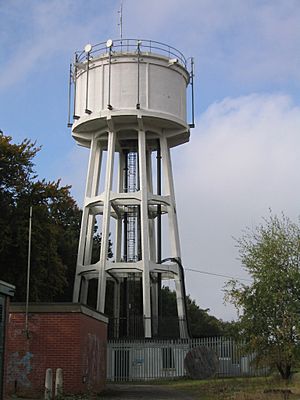 The suburb is around the junction of the (north-south) Harrogate Road A61 road and the Leeds Outer Ring Road (A6120) (west-east), at that point called the Moortown Ring Road, and overlooked by a Water Tower. Scott Hall Road (A61) and Harrogate Road lead southwards to Leeds city centre. However, the council ward boundary is the Ring Road, with properties to the north now being in the Alwoodley ward. The Church of England parish includes areas north of the Ring Road. A set of woods north and south of the Ring Road and by the water tower are called the Moortown Plantation.

It includes small estates of council housing around the junction of King Lane and the Moortown Ring Road.

Moortown Corner is the junction between Street Lane and Harrogate Road, a local shopping area and geographical reference. The building known as the Corner House was built as a cinema (1938–1940), ballroom and restaurant but now contains shops. From 1968 to 2008 it contained a casino. Nearby is a large Marks and Spencer Simply Food supermarket which serves the surrounding area. Branches of Leeds Building Society, Yorkshire Bank and Halifax can also be found at Moortown Corner. 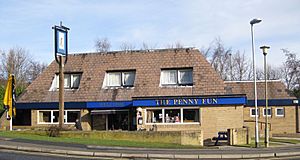 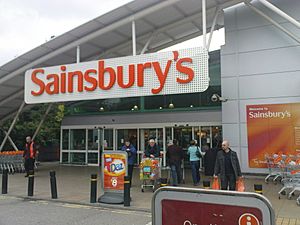 Moor Allerton District Centre is adjacent to the Black Moor estate, north of the Ring Road and west of the junction with King Lane, which opened in 1982. It includes a public library.

However it is mainly a shopping centre, with a large Sainsbury's, and a Homebase. It includes a public house, the Penny Fun, whose name relates to the history of the area as follows. The word 'pen' comes from the Celtic for 'hill'. What is now Tunnel How Hill is visible from the Centre to the south-west. It was previously Pen-how-fyn, and a hamlet around what is now the Centre was Paenfynaen (where fynaen means settlement). Tunnel How Hill was referred to as Penny Fun in the 19th century and several houses in the vicinity used the name. There is a Penny Field nearby in Meanwood Park. 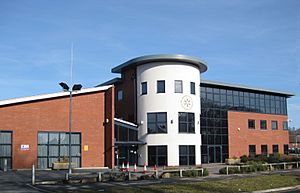 Moortown and neighbouring Alwoodley are the main centres of the Leeds Jewish Community. There are three synagogues in the Moortown area. The Marjorie and Arnold Ziff Community Centre opened in 2005, providing facilities for the Jewish community in Leeds and district, with the only Kosher restaurant in Leeds and providing offices for some Jewish organizations. The Church of England parish church is St John the Evangelist on the corner of Harrogate Road and the Ring Road; the Catholic one is the Immaculate Heart of Mary Church. There is also a Baptist church on King Lane. A Muslim community centre has been set up in a former pub on Lingfield Hill. 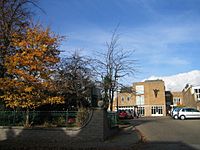 There is a Rugby Union football club. Moortown Golf Club hosted the 1929 Ryder Cup, but is well north of the Ring Road and is now in the Alwoodley ward. Moor Allerton Sports and Social Centre has bowls, tennis and indoor activities. North Leeds FC's home pitch is situated on Cranmer Bank, next to Moortown Social Club.

All content from Kiddle encyclopedia articles (including the article images and facts) can be freely used under Attribution-ShareAlike license, unless stated otherwise. Cite this article:
Moortown, Leeds Facts for Kids. Kiddle Encyclopedia.