Kids Encyclopedia Facts
This page is about the volcano in New Mexico. For other uses, see Mount Taylor.

Mount Taylor is a stratovolcano in northwest New Mexico, northeast of the town of Grants. It is the high point of the San Mateo Mountains and the highest point in the Cibola National Forest. It was named in 1849 for then president Zachary Taylor. Prior to that, it was called Cebolleta (tender onion) by the Spanish; the name persists as one name for the northern portion of the San Mateo Mountains, a large mesa. Mount Taylor is largely forested, rising like a blue cone above the desert below. Its slopes were an important source of lumber for neighboring pueblos.

Mount Taylor is the cone in a larger volcanic field, including Mesa Chivato. The Mount Taylor volcanic field is composed primarily of basalt (with 80% by volume) and straddles the extensional transition zone between the Colorado Plateau and the Rio Grande rift. The largest volcanic plug in the volcanic field is Cabezon Peak, which rises nearly 2,000 feet above the surrounding plain. According to Robert Julyan’s The Place Names of New Mexico, the Navajos identify Cabezon Peak “as the head of a giant killed by the Twin War Gods” with the lava flow to the south of Grants believed to be the congealed blood of the giant. 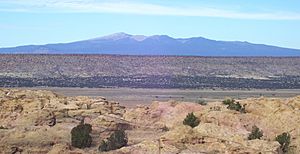 A view of Mount Taylor to the north from the west end of the Sky City of Acoma Pueblo. 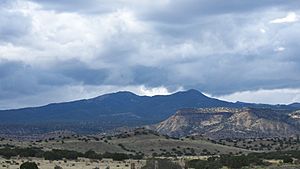 A southwest view of Mount Taylor, as seen from the village of Encinal, NM.

To the Navajo people, Mount Taylor is Tsoodził, the blue bead mountain, one of the four sacred mountains marking the cardinal directions and the boundaries of the Dinetah, the traditional Navajo homeland. Mount Taylor marks the southern boundary, and is associated with the direction south and the color blue; it is gendered female. In Navajo mythology, First Man created the sacred mountains from soil from the Fourth World, together with sacred matter, as replicas of mountains from that world. He fastened Mount Taylor to the earth with a stone knife. The supernatural beings Black God, Turquoise Boy, and Turquoise Girl are said to reside on the mountain. Mount Taylor is also sacred to the Acoma, Hopi, Laguna and Zuni people.

Mount Taylor was active from 3.3 to 1.5 million years ago during the Pliocene, and is surrounded by a field of smaller inactive volcanoes. Repeated eruptions built lava domes and produced lava flows, ash plumes, and mudflows. The mountain is surrounded by a great volume of volcanic debris, suggesting multiple major eruptions, possibly similar to that of Mount Saint Helens and the San Francisco Peaks near Flagstaff, Arizona. Estimates vary about how high the mountain was at its highest. Conservative estimates place its maximum near a similar pre-explosion height for the San Francisco Peaks of 16,000 to 18,000 feet (4,900 to 5,500 m), and an extreme estimate places it near 25,000 feet (7,600 m).

Mount Taylor is the site of the Mount Taylor Quadrathlon, an endurance event which has been held at this location for almost thirty years. The event includes running, skiing, bicycling and snowshoeing for 43 miles.

Mount Taylor is very rich in a uranium-vanadium bearing mineral, and was mined extensively for it from 1979 to 1990. The Mount Taylor and the hundreds of other uranium mines on Pueblo lands have provided over thirteen million tons of uranium ore to the United States since 1945.

Concern has arisen regarding the impact of future mining activities on the site. In June 2008 the New Mexico Cultural Properties Review Committee voted in favor of a one-year emergency listing of more than 422,000 acres (171,000 ha) surrounding the mountain’s summit on the state Register of Cultural Properties. "The Navajo Nation, the Acoma, Laguna and Zuni pueblos, and the Hopi tribe of Arizona asked the state to approve the listing for a mountain they consider sacred to protect it from an anticipated uranium mining boom, according to the nomination report." In April 2009, Mount Taylor was added to the National Trust for Historic Preservation's list of America's Most Endangered Places.

On 3 September 1929, the Transcontinental Air Transport Ford 5-AT-B Tri-Motor City of San Francisco struck Mount Taylor during a thunderstorm while on a scheduled passenger flight from Albuquerque Airport in Albuquerque, New Mexico, to Los Angeles, California, killing all eight people on board.

All content from Kiddle encyclopedia articles (including the article images and facts) can be freely used under Attribution-ShareAlike license, unless stated otherwise. Cite this article:
Mount Taylor (New Mexico) Facts for Kids. Kiddle Encyclopedia.