Mountain View is the largest city in and the county seat of Stone County, Arkansas, United States. Located in the Ozarks, the city has a rich tradition of preserving folk music and culture. Founded in 1873, the city's economy is largely based on tourism related to its title as the "Folk Music Capital of the World". Mountain View hosts the Arkansas Folk Festival in April, various folk artists at Ozark Folk Center State Park throughout the year, and weekly music gatherings on the courthouse steps that are free and open to the public. The city is also known for outdoors recreation opportunities, including Blanchard Springs Caverns, trout fishing on the White River and the Ozark National Forest.

The town's name comes from its location in a valley bordered by the Blue Mountain Range of the Ozark Mountains. Prior to the founding of Mountain View in 1890, the town of Riggsville, established in 1819 by Thomas Augustus Riggs, existed immediately to the east remaining until after the Civil War, when towns with southern sympathies were to be renamed or moved altogether.

Mountain View was incorporated on August 14, 1890.

A tornado on April 14, 1996, rated F4 on the Fujita scale killed NFL quarterback Kurt Warner's mother-in-law and father in-law. Another EF4 tornado caused major damage to the town on February 5, 2008 in the 2008 Super Tuesday tornado outbreak, the deadliest tornado outbreak in two decades.

The climate in this area is characterized by hot, humid summers and generally mild to cool winters. According to the Köppen Climate Classification system, Mountain View has a humid subtropical climate, abbreviated "Cfa" on climate maps. 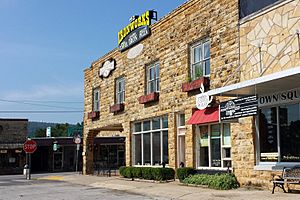 Local festivals play an integral part in Mountain View's economy and culture, and the city is widely know throughout the country for its hospitality, uniqueness and relaxed pace of life. As such, thousands of people travel to Mountain View each year to attend one of these events, and get a taste of Ozark Mountain culture. Often lodging must be secured a year in advance of the two major festivals. Some local estimates say that the city's population has grown to as much as 100,000 during past festivals, though this is likely an exaggeration. Average festival attendance tends to fall between 40,000 and 60,000.

In April, the city hosts the Ozark Folk Festival. A highlight of this festival is an old-fashioned "home-town" parade, which brings out school bands, patriotic veterans groups, show horses, and decorated floats. Numerous folk craft vendors and many impromptu performances of live folk music are also part of the celebration.

During the spring, summer and fall, anytime the weather is nice, people from all over will gather in and around the courthouse square to play and listen to music. Bluegrass mostly, but a wide array of folk, swing, country and gospel can be heard performed by local townsfolk as well as pickers from hundreds of miles away. Small eating establishments on the square serve BBQ, hamburgers, corn dogs, funnel cakes, ice cream, milkshakes, and even beans & cornbread.

During the last weekend of October, thousands attend the Arkansas Bean Fest and Great Championship Outhouse Races. Early Saturday morning, nearly one ton of pinto beans are cooked in large, antique iron kettles that are set up along the west side of the courthouse square. Promptly at noon, a nearly endless amount of free beans and cornbread are served to the gathered crowd. The festival continues with the famous Outhouse Race. Teams from Arkansas and surrounding states push outhouses built on wheels (similar to a go-kart) in a series of races. The overall champion receives the coveted Golden Toilet Seat Trophy. Handmade crafts and folk music play an integral part in this festival as well.

Other local festivals included the Mountain View Bluegrass Festival, held in both mid-March and mid-November; An Old-Fashioned Fourth of July, held on July 3 and 4; and the Ozark Mountain Christmas, held throughout the month of December. The latter festival is especially notable because it features the town Christmas tree lighting and lighting of the downtown square, including the courthouse and other downtown buildings.

The Ozark Folk Center plays host to several events throughout the year, including live concerts by well-known artist such as the Old Crow Medicine Show and Del McCoury, the Arkansas State Fiddle Championships, and workshops teaching banjo, dulcimer, and other folk crafts.

The local economy is largely tourism-based. Numerous hotels and restaurants exist to serve travelers who come to visit the nearby Blanchard Springs Caverns, in Fifty-Six, Arkansas, The Ozark Folk Center State Park, and Loco Ropes Treetop Adventure Park. Many others seek the world-renowned trout fishing of the White River, or the excellent camping, hiking and mountain-biking that can be found in the Ozark National Forest. A few live music and variety shows, such as the White River Hoedown, also entertain travelers by mixing contemporary country, gospel and bluegrass music with a bit of local humor. However, the majority of visitors to Mountain View come to attend one of the two major festivals held here every year, and to enjoy the impromptu folk music jam sessions that occur around the courthouse square.

The remainder of the local economy consists mostly of agriculture, specifically the farming of livestock, primarily cattle and chickens. Large-scale industrial activities in the area are overall nonexistent, excepting a few small manufacturing companies. The Stone County Iron Works, a nationally known company that produces iron furniture, fixtures and housewares, is headquartered in Mountain View. Recently, the city has seen expansion of its personal aircraft maintenance and repair industry.

Stone County, along with neighboring Arkansas counties, is a dry county.

The city hosts a satellite campus of Ozarka College, a two-year institution whose main campus is located in Melbourne, Arkansas. The city is also home to the main campus of the Mountain View School District, a secondary school that also maintains campuses in Timbo, Arkansas and Fox, Arkansas. The school district boundaries are the same as those of Stone County, Arkansas.

All content from Kiddle encyclopedia articles (including the article images and facts) can be freely used under Attribution-ShareAlike license, unless stated otherwise. Cite this article:
Mountain View, Arkansas Facts for Kids. Kiddle Encyclopedia.