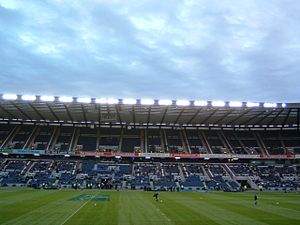 Murrayfield stadium in Edinburgh is the home of the Scottish national rugby team. It was first built in 1925. In 1995, the stadium was renovated. It has seats 67,800 people. It held the record for the most people at a rugby union match. 104,000 people watched Scotland play Wales in 1975.

All content from Kiddle encyclopedia articles (including the article images and facts) can be freely used under Attribution-ShareAlike license, unless stated otherwise. Cite this article:
Murrayfield Stadium Facts for Kids. Kiddle Encyclopedia.