Mystic Knights of Tir Na Nog is an Irish/American fantasy-adventure television series set in a fantasy version of ancient Ireland, created by Saban Entertainment. It was loosely based on actual Irish mythology. The name is derived from Tír na nÓg, one of the Otherworlds of Irish mythology. It was Saban's first fantasy series to involve knights, dragons, and wizards. It aired on the Fox Kids Network from September 12, 1998 and ending on May 7, 1999. A second season entitled Mystic Knights: Battle Thunder was planned, but was later cancelled, and its budget was put towards Power Rangers Lost Galaxy and the English dub version of Digimon: Digital Monsters. The resulting series was an attempt in doing an original non-Japanese special-effects series rather than adapting from actual Japanese tokusatsu.

On an unnamed island, queen Maeve of Temra seeks to conquer the peaceful kingdom of Kells and enlists the evil fairy Mider, who gives her the mystical Rune Stone allowing Maeve to use sorcery. Queen Maeve mostly uses the Rune Stone often to create or summon monsters whom she sends to wreak havoc. When king Conchobar of Kells seeks a way to protect his kingdom, protagonist Rohan, a druid's apprentice, goes in search of the prophesied hero "Draganta", with his friend the reformed thief Angus.

Later joined by the foreign Prince Ivar, and Conchobar's daughter, princess Deirdre, they are drawn into Tir Na Nóg, whose king Fin Varra puts the group through various tests to determine their worthiness. The heroes having passed these tests, King Fin Varra gives them certain weapons granting control of the Classical elements Fire, Air, Water and Earth. Thereafter the four overcome Mider's "Evil Sentinels" (recurring villains in the series) to capture corresponding suits of armor, and oppose the various monsters created by Maeve, assisted by the winged fairy "Aideen". Subsequently, Rohan gains a new partner in Pyre the dragon, who later identifies Rohan as Draganta. Later in the series, another Mystic Knight emerges, in the form of prince Garrett of Rheged, who joins the others after they free him from Maeve's telepathic control.

With her powers nearly exhausted, queen Maeve summons the monster "Lugad", who is more powerful than any previous creation and was trained and mutated by Maeve's teacher Nemain. It was discovered that Lugad and Rohan are both Maeve's abandoned sons. In the series finale, they co-operate with the other Mystic Knights to defeat Maeve, whom king Conchobar banishes to another island. As for Nemain, she has claimed the Silver Chalice that Ivar sought to reclaim as Mider enters an alliance with her. 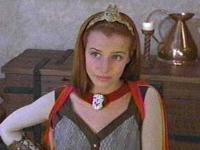 These are the monsters that the Mystic Knights battle:

In the US and UK, only one VHS was released. In Germany, two DVDs were released with two episodes each. The original English audio is not included on the DVDs.

All content from Kiddle encyclopedia articles (including the article images and facts) can be freely used under Attribution-ShareAlike license, unless stated otherwise. Cite this article:
Mystic Knights of Tir Na Nog Facts for Kids. Kiddle Encyclopedia.