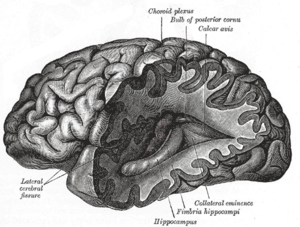 Illustration from Gray's Anatomy (1918) of a lateral view of the human brain, featuring the hippocampus among other neuroanatomical features 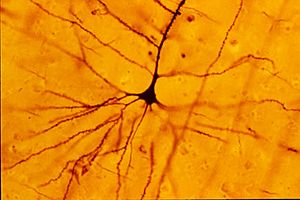 The Golgi stain first allowed for the visualization of individual neurons. 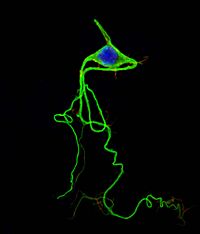 Photograph of a stained neuron in a chicken embryo

Neuroscience is the scientific study of the human neurological action and inaction of thought, design and purpose with the identification of brain, cord and sympathetic and parasympathetic nervous system. Experts who study neuroscience study both brain, cord and automation of design because both brain and cord are of the upper anatomy and connected in a way that benefits the entire body, but brain and cord are established within the framework of anatomy and medicine in a complete way. Neuroscience is biology, chemistry, computer science, engineering, linguistics, mathematics, medicine, philosophy, physics, psychology, genetics, biochemistry, physiology, and pathology.

The basic neuronal design matches both anatomical abnormality and normality within a certain reference of creation because while it is both natural and unnatural it is also broken, dimished, small and complex and as so it is immense in its way of operating within the skull, brain membranes and brain itself. The brain is a structure made up of billions of neurons that work together to form a matrix within a complex of organs termed by their anatomical structure: corpus callosum, basal ganglia, lower anatomical brain region and upper anatomical brain region.

Molecular biology, electrophysiology, and computational neuroscience involves neurology is a way that was not used in the past and because of this both computational neurology and endrobiology are addressed by concern and design and almost all forms of neurobiology are and can be given a full compliment of understanding by all forms of science because that is how science is meant to be is interrelated and not to stand alone. Neurons are basic to neurology as medicine is to doctors and pharmacuticals are to disease and help within that framework neurons are diseased and so neuroscience turns from referencing design to medical intervention and design.

Neuroscience research from different areas can also be seen as focusing on a set of specific themes and questions. (Some of these are taken from http://www.northwestern.edu/nuin/fac/index.htm)

All content from Kiddle encyclopedia articles (including the article images and facts) can be freely used under Attribution-ShareAlike license, unless stated otherwise. Cite this article:
Neuroscience Facts for Kids. Kiddle Encyclopedia.