Northfield is a town in Franklin County, Massachusetts, United States. Northfield was first settled in 1673. The population was 2,866 at the 2020 census. It is part of the Springfield, Massachusetts Metropolitan Statistical Area. The Connecticut River runs through the town, dividing West Northfield from East Northfield and the village of Northfield, where the town hall is located.

Part of the town is included in the census-designated place of Northfield.

Originally settled and inhabited by the Sokoki tribe, the area was the site of the village of Squawkeag. Northfield was first colonized in 1673 by the English and was officially incorporated in 1723.

The territory was successfully defended a number of times by Native Americans. As a result, the English colonists were occasionally taken north to Quebec, held as hostages by the French, causing the town to revert to American Indian control a few times. Eventually, conflicts with the Native American population ceased after most of the native population was displaced and/or sold into slavery as a result of King Philip's War and after a series of massacres of local Indian villages.

During Dummer's War, on August 13, 1723, Gray Lock raided Northfield, and four warriors killed two citizens near the town. The next day they attacked Joseph Stevens and his four sons in Rutland. Stevens escaped, two boys were killed, and the other two sons were captured.

Much of Northfield's development in the late nineteenth century was spurred by the work of evangelist Dwight Lyman Moody, a native of Northfield who established the Northfield Seminary for Girls in 1879 on a sweeping hillside in East Northfield. The school was the site of Moody's religious conferences, which attracted thousands of visitors to Northfield each summer. The influx of visitors led to the development of the town as a summer resort, especially after the opening of the Northfield Hotel in 1887. Francis Schell, a New York capitalist attracted by his interest in Moody's work at the Northfield Seminary, commissioned architect Bruce Price to design a summer home, which became known as the Northfield Chateau. Patterned after a French château but fanciful in style with prominent turrets and 99 rooms, the house fell into a state of disrepair following Schell's death, and it was demolished in 1967. 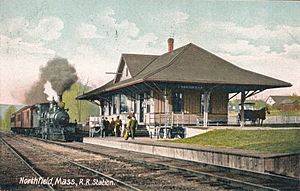 The Vermont and Massachusetts Railroad had established rail service to Northfield by 1850, along a line running from Millers Falls, Massachusetts to Brattleboro, Vermont. Even though the railway crossed the Connecticut River in Northfield, East Northfield Station was actually located in West Northfield, making it necessary for disembarking passengers to travel back across the Connecticut River on the lower deck of the rail bridge. To provide for safer and more convenient access across the river, Francis Schell gave $60,000 for the construction of a new steel bridge. The Schell Bridge is a Pennsylvania truss structure of impressive design, which crosses the river in one span of 515 feet (157 m).

In 1971 the Northfield Mount Hermon School was formed by the merger of the Northfield Seminary and the Mount Hermon School for boys, which Moody had founded in 1881 in nearby Gill. The school continued to operate as one school with two campuses some 5 miles (8 km) apart on opposite banks of the Connecticut River until 2005 when the school consolidated its operations on the Mount Hermon campus in Gill. The school's former campus in Northfield was purchased by Hobby Lobby, an Oklahoma-based chain of arts and crafts stores, as of December 2009 to be used as the campus for the new C.S. Lewis College, run by the California-based C.S. Lewis Foundation. Renovation began on the disused buildings in summer 2010, and the college expected to open for instruction in fall 2012, pending accreditation, but failed to meet the necessary funding threshold. Moody's birthplace and grave site, located on the Northfield campus, remain as a historic site. In December 2013, Hobby Lobby donated the auditorium, used for Moody's religious conventions, and the school's original Romanesque Revival buildings and grounds to the National Christian Foundation, which is responsible for identifying a viable owner for the property.

According to the United States Census Bureau, the town has a total area of 35.4 square miles (91.6 km2), of which 34.3 square miles (88.8 km2) is land and 1.1 square miles (2.8 km2), or 3.07%, is water. Northfield is the only town in Franklin County to be divided by the Connecticut River, though only partially; the river forms the southwest border of town. Several brooks flow directly into the Connecticut River within town, with the others (on the east side of the hills) leading into the Millers River, itself a tributary of the Connecticut. The western banks lie near Pond Mountain, whose peak is in neighboring Bernardston. To the east of the river are several mountains in the Upper Bald Hills, including Northfield Mountain, Brush Mountain (the highest point in town), Beers Mountain, South Mountain, Notch Mountain and Hogback Mountain (along the New Hampshire border). The southeast corner of the town is protected as part of the Northfield State Forest, with part of the northwest corner protected as part of Satan's Kingdom Wildlife Management Area. Most of the inhabited areas in town lie along the Connecticut River, and the town's main villages include East Northfield, Mount Hermon Station, Gill Station, Northfield Farms, and Sky Farm (between Brush Mountain and Northfield State Forest). The town is also home to a cross-country skiing area at Northfield Mountain, which is also traversed by the Metacomet-Monadnock Trail.

Northfield is located at the junction of the Massachusetts, New Hampshire and Vermont state borders along the Connecticut River. The town center is located 12 miles (19 km) northeast of Greenfield, 44 miles (71 km) north of Springfield, 52 miles (84 km) northwest of Worcester and 84 miles (135 km) west-northwest of Boston. The town is bordered by Vernon, Windham County, Vermont, and Hinsdale and Winchester, Cheshire County, New Hampshire, to the north, Warwick to the east, Erving to the south, Gill to the southwest and Bernardston to the northwest.

The town has no interstate highways, the closest being Interstate 91 in neighboring Bernardston, the nearest exit being along Route 10, which enters through the northernmost portion of Gill before it crosses the Connecticut River over the Bennett's Meadow Bridge. The Route 10 bridge is the only active car bridge within town; the smaller Schell Bridge lies inactive (since 1987) near the Vermont state line, and the old Vermont & Massachusetts Rail Bridge lies between them. For 2.5 miles (4.0 km), Route 10 shares a concurrency with Route 63, which passes from neighboring Erving to the south into Hinsdale to the north. Route 10 also passes into New Hampshire and the town of Winchester, as it heads north towards nearby Keene. Additionally, most of Route 142 passes through the town towards Vernon, Vermont, and nearby Brattleboro.

The Amtrak Vermonter line passes through the town daily, offering train service between many of the cities along the Eastern Seaboard. However, it no longer stops at Northfield (the nearest stops are in Greenfield and Brattleboro) and there is no other public transportation within town. The nearest private airport is Turners Falls Airport in nearby Montague, with the nearest national air service being 65 miles (105 km) south at Bradley International Airport in Connecticut. The town has a boat ramp near Schell Bridge.

All content from Kiddle encyclopedia articles (including the article images and facts) can be freely used under Attribution-ShareAlike license, unless stated otherwise. Cite this article:
Northfield, Massachusetts Facts for Kids. Kiddle Encyclopedia.