Pekin is a city in and the county seat of Tazewell County in the U.S. state of Illinois. Located on the Illinois River, Pekin is the largest city of Tazewell County and the second most populous municipality of the Peoria metropolitan area, after Peoria itself. As of the 2010 census, its population is 34,094. A small portion of the city limits extend into Peoria County. It is the most populous municipality in the United States with the name Pekin. It is a suburb of Peoria and is part of the Peoria Metropolitan Statistical Area.

Pekin's Mineral Springs Park is near Pekin Hospital and the Miller Senior Center. The city is also home to a high-rise residential facility of the United Auto Workers; the 1,538 megawatt, coal-fired Powerton Power Station (currently owned and operated by NRG Energy), the home of the Pekin Federal Correctional Institution; and the headquarters of a regional insurance company, Pekin Insurance.

In Illinois as elsewhere, indigenous peoples lived along rivers for transportation, water, and fishing. At the time of the European incursion, the several historical tribes in the area were of the Anishinaabe-language family, within the larger Algonquian-speaking tribes.

In January 1680, Robert de LaSalle and 33 fellow explorers landed their canoes on the eastern bank of the Illinois River. They built a winter refuge in what is now the southeast quarter of section 1 of Pekin Township. They also encountered historical Kickapoo peoples to the east as far as the Wabash River near the present Illinois-Indiana border.

Pekin and the Pekin area has a rich Native American heritage. South of Pekin on the Mackinaw River was the site of Chief Lebourse Sulky's Village in 1812. This was how it looked to a European American of the time:

At Little Makina, a river on the south side of Illinois, five leagues below Peoria, is a band, consisting of Kickapoos, Chippeways, Ottaways and Pottowottamies. They are called warriors, and their head man is Lebourse of Sulky. Their number is sixty men, all desperate fellows and great plunderers.

Sulky oversaw a village with a mixed population of the Anishinaabe-speaking Pottawatomi, Kickapoo and Ojibwa people. He fought alongside Tecumseh in the War of 1812, as did most of the chiefs of the Illinois Valley area. Later, this area was the site of Chief Shabbona's Pottawatomi village in the period prior to and during the Black Hawk War of 1832. Like Sulky, Shabbona had joined with Tecumseh during the War of 1812 and was with him when he fell at the Battle of Tippecanoe. After the war, Shabbona made peace with the U.S. government and protected white settlers in the Pekin area during the Black Hawk War.

Farmer Jacob Tharp was the first non-Indian resident, building a log cabin in 1824. Franklin School was later erected near this site. Other European-American settlers joined him, living near Chief Shabbona's large Indian village of about 100 wigwams, populated primarily by Pottawatomi, which was situated along Gravel Ridge, on the eastern shore of what is today Pekin Lake in northwest Pekin. Tharp's log cabin was south of Shabbona's village.

Following the Black Hawk War, the State of Illinois re-negotiated treaties with the Native American tribes in the state in order to extinguish their claims and remove all Indians from the state. The Pottawatomi village was relocated about a mile north to Worley Lake for a short time, until the inhabitants were removed to a reservation near Topeka, Kansas. Shabbona later moved north to Seneca near the Illinois River, where he died in 1859 on land that the citizens of Ottawa had given him.

After a county surveyor laid out a "town site" in 1829, an auction of the town plat and site was held in Springfield, Illinois. The village site was awarded to Major Isaac Perkins, Gideon Hawley, William Haines and Major Nathan Cromwell. Mrs. Ann Eliza Cromwell selected the name of the city, naming it after Beijing, China, then spelled "Peking" or "Pékin", the French spelling. Nathan Cromwell named many of the city streets after the wives and daughters of early Pekin settlers. It was long held, as first expressed in W.H. Bates' history of Pekin included in the 1870 Pekin City Directory, that Cromwell was assisted by his wife Ann Eliza in the naming of the streets.

It has been stated that Mrs. Cromwell named the town "Pekin" because she thought that "Pékin" (the French name for Beijing, China was known as "Peking" outside China) was on the exact opposite side of the world from the town she founded. However, this is not as improbable as it sounds-in the late 1700s and early 1800s, China and the United States were often thought to be on the exact opposite sides of the world and towns were often named after locations in China-another example is Canton, Ohio, named in 1805. "Peking" was sometimes romanised as "Pekin" at this time, supported by several other US towns founded around this time named "Pekin" (example Pekin, Ohio).

Pekin is known as the site where Lincoln and other ambitious politicians struck a deal in the 1840s. Lincoln was among several local Whig politicians who wanted to serve in the U.S. Congress. To keep from splitting the Whig vote, the competitors agreed to support each other for one term each in Congress. The pact is called the Pekin Agreement in Lincoln biographies. Lincoln ran and was elected to the 30th United States Congress in 1846, and retired at the end of the term. This single term in Congress was Lincoln's only experience in Washington before being elected President.

Although Illinois was a "free" state, pro-slavery sentiment was predominant throughout southern and central Illinois, which had been largely settled by Southerners, some of whom were slaveholders before the state was admitted to the union. Cities with pro-slavery sentiment included Peoria and Pekin.

"Pekin was a pro-slave city for years. Some of the original settlers had been slave-owners themselves, and the overwhelming sentiment in Pekin was Democratic. Stephen A. Douglas, not Abraham Lincoln, was the local hero, although Lincoln was well-liked, and had some German following."

Chiefly due to an influx of German immigrants after the Revolutions of 1848, abolitionist sentiment began to flourish in Pekin. Among Pekin's abolitionist leaders was Dr. Daniel Cheever, whose home at the corner of Capitol and Court streets was a depot on the Underground Railroad. Other Pekin abolitionists were the brothers Samuel and Hugh Woodrow. (Catherine Street in Pekin is named for Samuel's wife, and Amanda Street is named for Hugh's wife.)

During the Civil War, the inhabitants of Pekin were divided between the pro-slavery element, who favored the Confederacy, and the abolitionist and pro-Union element. Early in the war, the secessionist "Knights of the Golden Circle" openly supported secession and slavery in Pekin. The 1949 Pekin Centenary, p. 15, says the Knights were "aggressive and unprincipled," and "those who believed in the Union spoke often in whispers in Pekin streets and were wary and often afraid." As a response to the Knights' influence, Dr. Cheever and 10 other men gathered at 331 Court Street in Pekin on 25 June 1862 to establish the first council of the Union League of America, to promote patriotism and loyalty to the Union in the Civil War and the abolition of slavery. Its members hoped to counter Northern disillusionment with President Lincoln's military policies after early Union defeats in the American Civil War. Although closely allied with the Republican Party, the League sought to enroll all Union supporters, regardless of party. The anti-slavery Germans of Pekin took an active role in the Union League in their city.

By December 1863, the Union League claimed 140,000 members in Illinois and almost one million nationwide. The Union League movement focused on providing medical supplies to the Army, training nurses, and advocating equality for slaves. As the War gradually turned in favor of the North, the Union Leagues shifted to political endorsements, favoring Republicans who advocated full equality and voting rights for African Americans. The Union League played a prominent role in supporting Lincoln in his closely contested re-election in 1864. By the end of the Civil War, membership in the Union League of America grew to two million. Most of the clubs continue today, often in prominent civil roles. For example, the Union League Club of Chicago has been credited with founding many of the city's major cultural organizations and venues, including the Art Institute of Chicago, the Orchestra Hall, the Auditorium Theater, and the Field Museum.

In an early 20th-century revival, the Ku Klux Klan recruited new members as a fraternal organization, opposing new immigrants from southern and eastern Europe, and becoming influential in rapidly industrializing urban areas in the Midwest and West, as well as in the South. It had numerous members in Pekin and other Illinois cities. It was during this period that leading Klansmen took over ownership of the city newspaper, the Pekin Daily Times; they used it as an organ of Klan propaganda. They sold off the paper within a few years.

The city had an identity and reputation as a sundown town; it was known to be hostile to black residents and few settled there. On the other hand, some Pekin church pastors participated in the civil rights marches of the 1960s, and U.S. Senator Everett Dirksen from Pekin was integral to achieving passage of the Civil Rights Act of 1964. 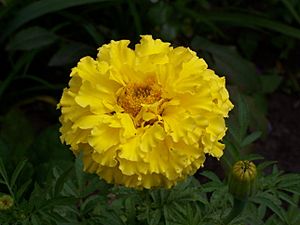 The Marigold Festival was started in 1973 to honor one of Pekin's "favorite sons", Senator Everett Dirksen. While in the United States Congress, Dirksen tried to have the marigold named as the national floral emblem. In support of Dirksen, the community began growing marigolds. While unsuccessful in the national flower contest, Dirksen's hometown of Pekin became known as the "Marigold Capital of the World".

The Marigold Festival is an annual celebration held the first weekend after Labor Day in September. Its activities include the annual Marigold Parade, the crowning of Miss Marigold, live music, and an arts and crafts fair that attracts exhibitors from five surrounding states.

In the early years of the festival, volunteers and residents planted more than two million marigolds throughout the city, creating displays to be judged by the garden club. Today the goal of the festival is to encourage community pride, displayed through marigold plantings and additional events such as a Medallion Hunt, 5 kilometer run/walk, Carnival, Art in the Park, Friday Night Family Fest, and live music. These events bring the people of Pekin together and highlight area businesses.

Food concessions at the Marigold Festival are run by non-profit organizations. Most of the Festive Food booths are located in Mineral Springs Park. Many groups use this as a major fundraising event. They include local churches and Boy Scout Troops, Kiwanis Club of Pekin, Pekin Community High School JROTC Boosters, Pekin Community High School show choir "Noteables", local firefighters, Pekin Lions Club, the Salvation Army, and United Way of Pekin. Over the years the Marigold Festival has grown to attract more than 100,000 people annually.

Other festivals in the local area include the Washington Cherry Festival, Morton Pumpkin Festival, Tremont Turkey Festival, and East Peoria Festival of Lights.

Pekin lies on the Illinois River, and its John T. McNaughton Bridge connects the city to a small area of land the city has annexed in Peoria County.

In the 1960s the campus was split into two buildings, with the freshman and sophomores at one campus (West Campus) and the juniors and seniors at another (East Campus). East Campus was expanded in 1997–1998, after which date West Campus closed and all four classes were reunited at the newer campus. After the local community lost in an attempt to save the school building, demolition on the west campus began in 2012 and was finished in 2014. A Dollar General now stands where the historic West Campus once stood.

All content from Kiddle encyclopedia articles (including the article images and facts) can be freely used under Attribution-ShareAlike license, unless stated otherwise. Cite this article:
Pekin, Illinois Facts for Kids. Kiddle Encyclopedia.