The Perth Concert Hall is a concert hall located in Perth, the capital of the Australian state of Western Australia. Owned by the City of Perth, the hall is the main venue of the West Australian Symphony Orchestra, and also hosts a number of other events and performances. The building itself is located in Perth's central business district, adjacent to the Supreme Court Gardens and Government House. The building has two façades: facing north over St Georges Terrace, and facing south over the Swan River.

The concert hall was constructed on land granted to the City of Perth by the Government of Western Australia, and opened on Australia Day (26 January), 1973. Designed by Howlett and Bailey Architects, local architectural firm, the building is constructed in the Brutalist style, making heavy use of white off-form concrete and a solid opaque interior. The main auditorium of the hall seats 1,729 people, as well as a 160-person choir gallery and a 3000-pipe organ. Acoustically, the venue is considered one of the best in Australia, with the design overseen by the New Zealand acoustician Sir Harold Marshall. 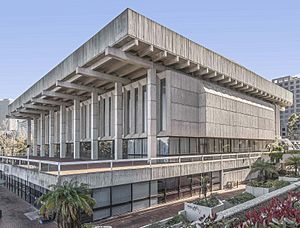 As early as 1950, the City of Perth secured a site between Stirling Gardens and Government House, occupied by the Department of Agriculture and the Australian Broadcasting Commission for the construction of a new town hall. The proposed site provoked vigorous public debate. Some wanted a riverside site, such as the Esplanade or Barracks Square, while others suggested land at the end of Barrack Street, between Stirling and Beaufort Streets, or the central Perth area between William and Barrack streets along Forrest Place. The official opening of the Perth Concert Hall included a midnight to dawn ball attended by almost 1,700 people. The Western Australian Symphony Orchestra was joined by 55 members of the South Australian Symphony Orchestra for the occasion, and the whole event was televised. Headlines of ‘A Milestone in the Cultural Life of WA’ greeted the opening. Earlier, John Birman, the Director of the Festival of Perth, had been quoted saying, ‘...it is the first concert hall in Australia since the war and has more than local significance...’. 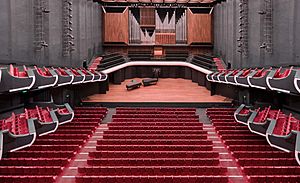 View of the auditorium from back stalls towards the stage and organ. 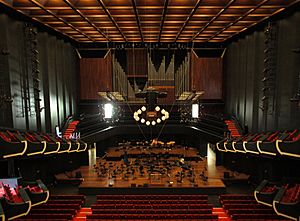 Interior detail of the Perth Concert Hall, showing the stage and pipe organ 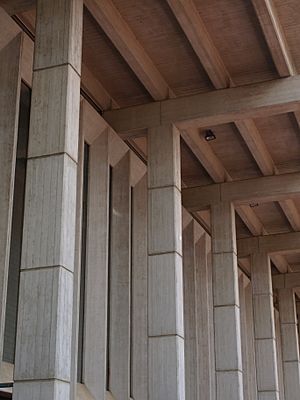 The building was designed by Howlett and Bailey Architects. Jeffrey Howlett and Don Bailey had won a design competition for a Town Hall and auditorium in 1961. Their design consisted of two buildings, one containing administrative offices and the other, oval in shape, comprising the 'town hall' or auditorium. The administration offices, called Council House, were built, however financial constraints and doubts regarding the auditorium's acoustic properties meant that construction of the auditorium building was delayed. Its design was subsequently re-considered and it was not until the late-1960s that a different plan was approved. This plan was

...to accommodate not more than 2,000 people and to cost no more than $2,000,000 and with the highest priority to be given to its musical uses, i.e. Symphony concerts, choral concerts, organ recitals, etc., and, in addition, performances of minimum staged ballet, fold dances or musical drama, and also be suitable for other functions such as large Civic receptions, conferences, conventions, public meetings, pageants, school speech days, pop concerts and folk singers. 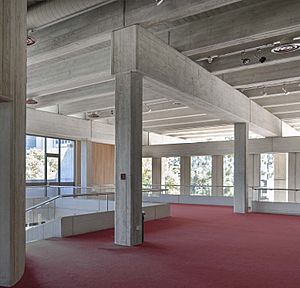 Through 1969, the architectural plans were amended several times. These amendments included beautification and landscaping of the main pedestrian approach from St Georges Terrace and construction of a subway under the Terrace, a pit for a 60-piece orchestra with removable flooring and seating to cover the pit when not in use, and improved access and facilities for disabled people. The original plans included a restaurant with a seating capacity for 400, but following inspection of similar halls in the eastern states of Australia, it was decided that this was not warranted. It was, therefore, decided to make the restaurant smaller and include a tavern and cocktail bar, allowing patrons a wider choice. The bar area was named The Wardle Room, after Sir Thomas Wardle.

It was the architects’ intention that the exhibition foyers would be used as a continually changing venue for all types of art (such as painting, tapestry and sculpture exhibitions) rather than as permanent exhibition spaces. This may have influenced the Perth City Council's indecision over whether or not to accept artist Sydney Nolan's offer to permanently loan the City a series of 64 paintings of wildflowers for hanging in the Hall. After considerable public debate over the matter, Nolan withdrew the offer and art dealers and others criticised the short sighted and parochial attitude of the Council in refusing the offer. Ironically, the first exhibition in the foyers featured 54 of Sydney Nolan's wildflower paintings.

Several consultants were involved in the design of the building, including acoustic consultants, structural engineers, and experts in escalators, stage machinery and lighting. D. H. Fraser was responsible for the structural design and Professor A. Harold Marshall was the acoustics consultant, in association with Warwick Mehaffey of the ABC.

Dr Marshall used computer modelling to predict how well people would hear in each of the seats and worked closely with the architects in designing the main auditorium, which according to Jefferey Howlett had to be

...a Great Room, as the Concertgebouw hall in Amsterdam, the Boston Symphony Hall and the Musikvereinsaal in Vienna are great rooms, recognised for their superb acoustic and that is not merely clarity...The great halls have ornate ceilings and other ornamentation. Though the Perth Concert Hall will be a completely modern building, the "fruity" ceilings and decorations of the older halls, which undoubtedly play a part in their acoustics, will be reproduced, in effect, in coffers hanging from the ceiling, in corrugated walls and in the complex double tier of boxes sloping up the side walls.

The Perth Concert Hall is an example of brutalist architecture, with its solid opaque interior, giant projecting roof, and use of white off-form concrete. It forms a counterpoint to the transparent filigree of Council House.

The auditorium features a specially commissioned 3000-pipe organ surrounded by a 160-person choir gallery and an audience seating capacity of 1,729. The organ, individually designed, cost $100,000 and was commissioned by Ronald Sharp of Sydney, who was also responsible for the organ at the Sydney Opera House. The larger pipes for the organ were imported from the Netherlands. Don Bailey recollects that Ron Sharp was an ‘extraordinarily talented person, largely self-educated, who has to his credit the design and construction of a number of organs, mostly in New South Wales. A nine-foot Steinway orchestral concert grand piano (Model D) was also imported from West Germany for installation in the Hall.

The Concert Hall was the first in Australia to have closed circuit television so that late comers could watch on two screens in the foyer while waiting for an appropriate time to enter. Another screen was in the office of the manager.

The Perth City Council and State Government, as well as the architects and builders, received many compliments on the Hall as it neared completion from visiting experts in the fields of music, architecture and construction.

The majority of concerts by the West Australian Symphony Orchestra are performed at the Perth Concert Hall. The venue is also used for their rehearsals.

The venue is also used to host national conventions and exhibitions, award ceremonies and gala dinners. Recent exhibitions include the Steinway piano exhibition in March 2008. In addition, the venue is used for private or corporate functions in areas other than the auditorium, for example in the foyers, bar and café.

All content from Kiddle encyclopedia articles (including the article images and facts) can be freely used under Attribution-ShareAlike license, unless stated otherwise. Cite this article:
Perth Concert Hall (Western Australia) Facts for Kids. Kiddle Encyclopedia.