Phillips County is a county located in the eastern part of the U.S. state of Arkansas, in what is known as the Arkansas Delta along the Mississippi River. As of the 2010 census, the population was 21,757. The county seat is Helena-West Helena. Phillips County is Arkansas's seventh county, formed on May 1, 1820, and named for Sylvanus Phillips, the area's first-known white settler and representative to the first Territorial Legislature of the Arkansas Territory. This lowland area was developed for cotton plantations in the antebellum area and is still largely rural.

In 1919 during the Elaine race riot in Phillips County, 237 African Americans were killed, attacked by armed whites trying to suppress the Progressive Farmers and Household Union of America which was organizing in the county. Because of the white mob action, the deaths were classified as lynchings by the Equal Justice Institute in its 2015 report. Phillips County thus ranks as the county with the highest number of lynchings in U.S. history. 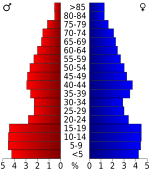 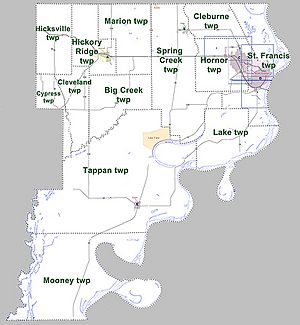 Townships in Phillips County, Arkansas as of 2010

Townships in Arkansas are the divisions of a county. Each township includes unincorporated areas; some may have incorporated cities or towns within part of their boundaries. Arkansas townships have limited purposes in modern times. However, the United States Census does list Arkansas population based on townships (sometimes referred to as "county subdivisions" or "minor civil divisions"). Townships are also of value for historical purposes in terms of genealogical research. Each town or city is within one or more townships in an Arkansas county based on census maps and publications. The townships of Phillips County are listed below; listed in parentheses are the cities, towns, and/or census-designated places that are fully or partially inside the township.

All content from Kiddle encyclopedia articles (including the article images and facts) can be freely used under Attribution-ShareAlike license, unless stated otherwise. Cite this article:
Phillips County, Arkansas Facts for Kids. Kiddle Encyclopedia.