The number of Pidgin users is thought to be more than 3 million in 2007. Released under the terms of the GNU General Public License, Pidgin is free software. 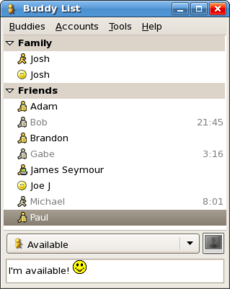 The program was made in or before 1999 by Mark Spencer, an Auburn University sophomore. It was made to give the features of AOL Instant Messenger for Linux.

The original name was GAIM, which stood for GTK+ AOL Instant Messenger. After pressure from AOL, the program was renamed to gaim.

However, on April 6 2007, the project development team announced the results of their talks with AOL. This included some name changes: gaim became Pidgin, libgaim became libpurple, and gaim-text became finch.

Due to the legal problems, version 2.0 of the software was stuck in beta stages. Following the talks, it was said that the first official release of Pidgin 2.0.0 was hoped to happen during the two weeks from April 8, 2007. However, Pidgin 2.0 did not release on time, but on April 22, 2007.

Pidgin 2.0.0 was released on May 3, 2007. This was the first version to be called Pidgin. It also contained a completely new graphics design.

All content from Kiddle encyclopedia articles (including the article images and facts) can be freely used under Attribution-ShareAlike license, unless stated otherwise. Cite this article:
Pidgin (software) Facts for Kids. Kiddle Encyclopedia.