Port is a municipality in the administrative district of Biel/Bienne in the canton of Berne in Switzerland. 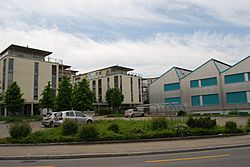 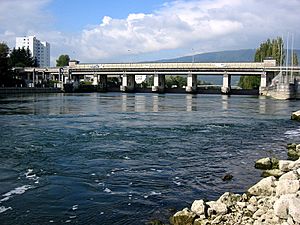 Regulating dam of Port and the Nidau-Büren Canal at Port

During the same year, industrial buildings made up 3.7% of the total area while housing and buildings made up 26.5% and transportation infrastructure made up 5.3%. while parks, green belts and sports fields made up 4.5%. Out of the forested land, all of the forested land area is covered with heavy forests. Of the agricultural land, 18.8% is used for growing crops and 4.5% is pastures, while 2.0% is used for orchards or vine crops. All the water in the municipality is flowing water.

The town lies on the Nidau-Büren channel, which links Lake Biel with Solothurn, dug out during the Jura water correction. Since then the community has been split into two parts on either side of the canal. The regulating dam Port, commissioned in 1939 and a small foot bridge, erected in the 1980s, connect both sides. The municipality stretches from the channel to the slopes of the Jensberg hill.

On 31 December 2009 Amtsbezirk Nidau, the municipality's former district, was dissolved. On the following day, 1 January 2010, it joined the newly created Verwaltungskreis Biel/Bienne.

All content from Kiddle encyclopedia articles (including the article images and facts) can be freely used under Attribution-ShareAlike license, unless stated otherwise. Cite this article:
Port, Switzerland Facts for Kids. Kiddle Encyclopedia.