Port Pirie (post code: 5540) is the sixth most populous city in South Australia after Adelaide, Mount Gambier, Whyalla, Murray Bridge and Port Lincoln. It is a seaport on the east coast of the Spencer Gulf, 223 km (139 mi) north of Adelaide. At June 2015 Port Pirie had an estimated urban population of 14,247.

The settlement was founded in 1845 and is the site of the world's largest lead smelter, operated by Nyrstar. It also produces refined silver, zinc, copper and gold.

Prior to European settlement, the location that became Port Pirie was occupied by the indigenous tribe of Nukunu. The location was called 'Tarparrie', which is suspected to mean "Muddy Creek". The first European to see the location was Matthew Flinders in 1802 as he explored the Spencer Gulf by boat. The first land discovery by settlers of the location was by the explorer Edward Eyre who explored regions around Port Augusta. John Horrocks also discovered a pass through the Flinders Ranges to the coast, now named Horrocks Pass.

The town was originally called Samuel's Creek after the discovery of Muddy Creek by Samuel Germein. In 1846, Port Pirie Creek was named by Governor Robe after the John Pirie, the first vessel to navigate the creek when transporting sheep from Bowman's Run near Crystal Brook. In 1848, Matthew Smith and Emanuel Solomon bought 85 acres (34 ha) and subdivided it as a township to be known as Port Pirie. Little development occurred on site and by the late 1860s there were only three woolsheds on the riverfront.

The government town was surveyed in December 1871 by Charles Hope Harris. The thoroughfares and streets were named after the family of George Goyder, Surveyor General of South Australia, with the streets running parallel and at right angles to the river. In 1873 the land of Solomon and Smith was re-surveyed and named Solomontown. On 28 September 1876, Port Pirie was declared a municipality, with a population of 947.

With the discovery of rich silver-, lead- and zinc-bearing ore at Broken Hill in 1883, and the completion of a narrow gauge railway from Port Pirie to close to the Broken Hill field in 1888, the economic activities of the town shifted. In 1889 a lead smelter was built by the British Blocks company to treat Broken Hill ore. Broken Hill Proprietary initially leased the smelter from British Blocks and then began constructing their own smelter from 1892. In 1915 the smelter was taken over by a major joint venture of Broken Hill-based companies, Broken Hill Associated Smelters (BHAS). Led by the Collins House Group, BHAS became the biggest lead smelter in the world by 1934. The smelter gradually passed to Pasminco, then Zinifex, and is now operated by Nyrstar.

By 1921 the town's population had grown to 9801 living in 2308 occupied dwellings. By this date there were also 62 boarding houses to cater for the labour demands at the smelter and on the increasingly busy waterfront. Port Pirie was declared South Australia's first provincial city in 1953, and today it is South Australia's second largest port. It is characterised by a gracious main street and some interesting and unusual historic buildings.

Port Pirie has a number of heritage-listed sites, including:

The most popular industries for employment were Basic Non-Ferrous Metal Manufacturing (9.7%), School Education (6%), Hospitality (only including hotels) (11%), Health (5.4%) and Animal Husbandry (4%), while the unemployment rate is approx. 11%. The median weekly household income is A$608 or more per week, compared with $924 in Adelaide. 27.1% of the population identify themselves as Catholic, while 23.7% identify with no religion at all.

Port Pirie is at an elevation of 4 metres above sea level. It is approximately 8 kilometres (5.0 mi) inland, on the Pirie River, which is a tidal saltwater inlet from Spencer Gulf. It is on the coastal plain between Spencer Gulf (to the west) and the Flinders Ranges to the east.

Port Pirie exists in a region with a semi-arid climate, outside Goyder's Line, surrounded by mallee scrub. Average daily maximum temperatures vary from a mild 16.4 °C in winter to 32.0 °C in summer. Its average annual rainfall is 345.2 millimetres, most of which falls in winter.

According to the Köppen climate classification, Port Pirie has a warm semi-arid climate, noted as BSh.

Port Pirie is 5 km (3 mi) off the Augusta Highway. It is serviced by Port Pirie Airport, six kilometres south of the city.

The first railway in Port Pirie opened in 1875 when the South Australian Railways 1,067 mm (3 ft 6 in) gauge Port Pirie-Cockburn line opened to Gladstone, ultimately being extended to Broken Hill. The original Ellen Street station was located on the street with the track running down the middle. The station today is occupied by the Port Pirie National Trust Museum.

As far back as 1943, a plan existed to build a new station to remove trains from Ellen Street. As part of the gauge conversion of the Port Pirie to Broken Hill line, Mary Elie Street station was built to replace both Ellen Street and Port Pirie Junction stations.

When opened, the new station was the meeting point for the Commonwealth Railways and South Australian Railways networks with through trains changing locomotives and crews, so the disadvantages were not as notable. However, after both became part of Australian National in July 1975 and trains began to operate in and out with the same locomotives, trains began to operate via Coonamia station on the outskirts of the city.

Mary Ellie Street station was eventually closed in the 1990s and in 2009 was redeveloped as the city's library. Until 2012, a GM class locomotive and three carriages were stabled at the platform.

Lead smelters contribute to several environmental problems, especially raised blood lead levels in some of the town population. The problem is particularly significant in many children who have grown up in the area. There is a government project to address this. Nyrstar plans to progressively reduce lead in blood levels such that ultimately 95% of all children meet the national goal of 10 micrograms per decilitre. This has been known as the tenby10 project. Community lead in blood levels in children are now at less than half the level that they were in the mid 1980s.

The Port Pirie smelter has a project underway to reduce lead levels in children to under 10 micrograms per decilitre by the end of 2010.

"The goal we are committed to achieving is for at least 95% of our children aged 0 to 4 to have a blood lead level below ten micrograms per decilitre of blood (the first ten in tenby10) by the end of 2010 (the second ten in tenby10)." 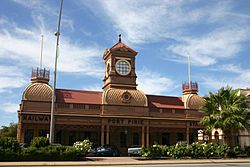 Port Pirie is the main centre for the Mid North area. Many towns in the area rely on Port Pirie for shopping and employment. It also has many educational institutions such as John Pirie Secondary School (years 8-12), St Mark's College (reception - year 12), Mid North Christian College (reception - year 12), many preschools and primary schools, and a TAFE Campus (Adult Education).

Port Pirie is home to the National Trust Historic and Folk Museum and Memorial Park. Every September and October it hosts a country music festival. It has significant Italian & Greek communities.

The Keith Michell Theatre, within the Northern Festival Centre, is named after the actor Keith Michell who grew up in Warnertown, 5 km (3 mi) from Port Pirie.

All content from Kiddle encyclopedia articles (including the article images and facts) can be freely used under Attribution-ShareAlike license, unless stated otherwise. Cite this article:
Port Pirie Facts for Kids. Kiddle Encyclopedia.