Prades (Catalan: Prada de Conflent or, simply, Prada) is a commune in the Pyrénées-Orientales department in southern France. It was the capital of the historic Catalan comarque of Conflent.

It is a subprefecture in the department and the capital of the Prades arrondissement.

Name of the city

In Catalan, the name of the commune is Prada, a word that comes from the Latin word prata ("prairie").

Prades is the main ciy of the Conflent, a natural region of the Pyrénées-Orientales; it is at the foothill of the Canigou mountain, to the west of Perpignan. The Têt river flows through the city.

The commune is at 44 km (27 mi) from Perpignan. It is surrounded by the communes Catllar, Eus, Los Masos, Clara, Taurinya, Codalet, Ria-Sirach.

The climate in Prades in the Köppen climate classification is Cfb - Oceanic climate with template summers.

Evolution of the population in Prades 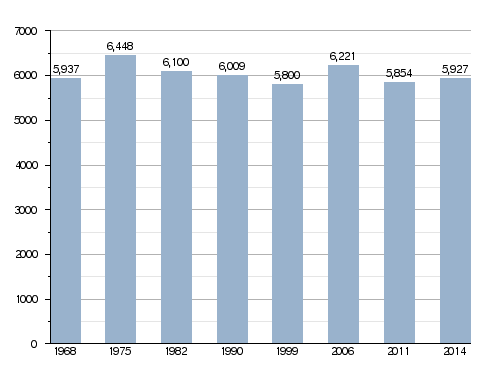 Prades is a subprefecture of the Pyrénées-Orientales department since 1790. It is also the capital of the arrondissement of Prades and the administrative centre (French: chef-lieu) of the canton Les Pyrénées catalanes with 62 communes and 26,765 inhabitants in 2014.

Prades is twinned with:

Some places of interest in or around Prades are:

People from or related to Prades

Prades was also the adopted home of cellist Pablo Casals and grammarian Pompeu Fabra during their exile from the Spanish Civil War. A small museum in Prades commemorates Casals.

All content from Kiddle encyclopedia articles (including the article images and facts) can be freely used under Attribution-ShareAlike license, unless stated otherwise. Cite this article:
Prades (Pyrénées-Orientales) Facts for Kids. Kiddle Encyclopedia.