The most common system is the W.A. Government division of the state into regions for economic development purposes, which comprises nine defined regions; however, there are a number of other systems, including those made for purposes of land management (such as agriculture and conservation), information gathering (such as statistical and meteorological), and election for political office. 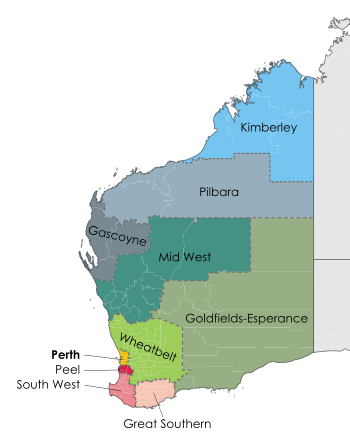 The Western Australian system of regions defined by the Government of Western Australia for purposes of economic development administration, which excludes the Perth metropolitan area, is a series of nine regions.

These nine regions were established by the Regional Development Commissions Act 1993, which defined their extents and established Regional Development Commissions to promote their economic development. In defining the regions, an attempt was made to capture distinct socio-economic communities. For example, the Goldfields-Esperance region of Western Australia has an economy based heavily on mining, whereas the Wheatbelt region is economically dependent on agriculture.

The nine defined regions are:

The same region names as those used by the Regional Development Commissions Act (RDCA) are incorporated into the system used by BOM, which uses 14 regions, so the boundaries of the two systems do not coincide. In some of the regions, the BOM designates the forecast area regions with a finer level of detail using points of the compass. Regions numbered 8 to 14 are usually known as forecast areas in the South West Land Division; coastal zones for sea forecasts are dealt with in Coastal regions of Western Australia.

Administrative regionalisations include Landcare Districts and the Department of Agriculture's "Land-use Zones". However the Department of Agriculture publications - Technical Bulletins - usually titled An inventory and condition report/survey... of a particular region are very specifically focused upon land systems that are based on natural features.

Western Australia is divided into approximately 90 land districts for cadastral purposes. There are five land divisions in Western Australia, as specified in Schedule 1 of the Land Administration Act 1997.

Western Australia has the longest coastline of any state in Australia, at 10,194 km. The regions can be determined by the underlying geology, and in the case of the Bureau of Meteorology - features such as points and capes are useful indicators of coastal water forecasts.

Landgate publishes touring maps that include coastal zones including:

Census and Australian Bureau of Statistics

In some cases, regions have been grouped into larger areas, to describe a larger area in a single term:

All content from Kiddle encyclopedia articles (including the article images and facts) can be freely used under Attribution-ShareAlike license, unless stated otherwise. Cite this article:
Regions of Western Australia Facts for Kids. Kiddle Encyclopedia.