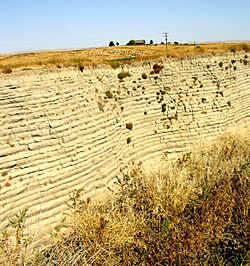 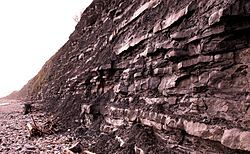 This is a rhythmite: obvious repeat pattern, with limestone blocks with shale in between them. Blue Lias cliffs at Lyme Regis, Dorset 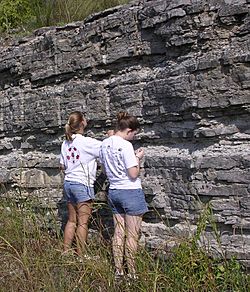 A stratigraphic section of Ordovician limestone exposed in central Tennessee, U.S. The less-resistant and thinner beds are composed of shale. The vertical lines are drill holes for explosives used during road construction

A rhythmite is layers of sediment or sedimentary rock laid down in a repeated pattern. This pattern may be varves, which are an annual pattern, or shorter or longer-term rhymites. Tides in some places have left rhythmites.

Many rock formations show repeating patterns of strata. For example, clay layers may alternate with sandstone layers; or carbonate layers alternate with shales. This is usually caused by repeating cycles of climate. In warmer times the sea rises, and carbonate rocks are deposited in shallow subtropical seas. Later, ice builds up at the poles and the sea level drops. Then the same area is close to shore, and gets sand and mud washed down by rivers.

However, temperature and sea-level changes are not the only causes of rhythmites. In volcanic areas a pattern of deposition in lakes may be regularly interrupted by eruptions of volcanic ash, so that in the record of the rocks shales and mudstone alternates with tuff. 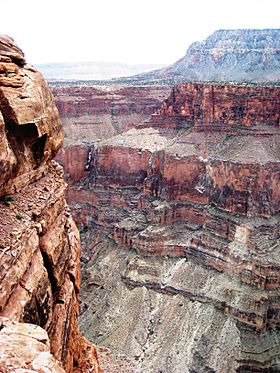 Grand Canyon: rhythmites are very clear in some formations, and not present in others

All content from Kiddle encyclopedia articles (including the article images and facts) can be freely used under Attribution-ShareAlike license, unless stated otherwise. Cite this article:
Rhythmite Facts for Kids. Kiddle Encyclopedia.