The Touchet River is a 55-mile (89 km) tributary of the Walla Walla River in southeastern Washington in the United States.

The upper Touchet was a traditional summer meeting place for trade and games for the Palus, Nez Perce and Walla Walla tribes. The name Touchet derives from the similarly pronounced Sahaptin term for the river, Tu-se meaning roasting. Nez Perce legend tells that coyote roasted salmon at this river after breaking a fish dam guarded by the seven swallow sisters at Celilo.

Its headwaters lie in the Umatilla National Forest which is located in the Blue Mountains in Columbia County, southern Washington. It originates above the town of Dayton, Washington. It then passes through Waitsburg and Prescott before joining the Walla Walla at the town of Touchet, Washington.

The Touchet is known for its rainbow and cutthroat trout fishing, especially in the upper and middle reaches.

Summer steelhead, which like salmon are anadromous, and Chinook salmon spawn throughout a large portion of the middle and upper reaches of the Touchet River drainage, the population is imperiled in the 21st century. The Nine Mile Dam, constructed in 1905 on the Walla Walla River below the confluence with the Touchet River, impeded anadromous fish migration into the Touchet, but a wild steelhead population (listed as threatened under the Endangered Species Act) continues to return to the river. 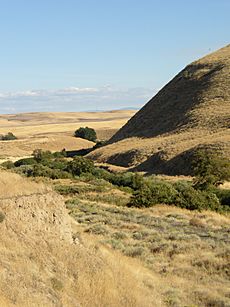 The Touchet River lay in the traditional range of the Palus American Indian tribe, marking their southern border with the range of the Walla Walla tribe. These peoples were of the Sahaptin-speaking group which traditionally inhabited the Columbia Plateau region of the northwestern United States.

On their return journey in 1806, the Lewis and Clark Expedition followed the Old Celilo Falls Trail, up the Walla Walla and Touchet River Valleys; they camped on the Touchet about 12 miles (19 km) north of today's town of Touchet on April 30, 1806. The Lewis and Clark Trail State Park commemorates their May 1, 1806 campsite on the Touchet River. The expedition left the Touchet River to follow a tributary, Patit Creek, at what is now Dayton. They camped about 2 miles (3 km) above modern-day Dayton on Patit Creek on May 2, 1806, before following the trail across country to the Tucannon River.

The Whitman Mission catalyzed white settlement of the region, beginning in 1843 when 1,000 people, 120 wagons, and approximately 5,000 horses and cattle came to the Walla Walla valley. The initial settlers remained near the current city of Walla Walla and into the Touchet River valley. 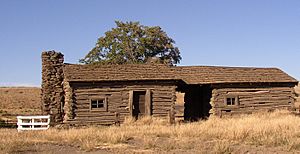 The Lamar Cabin, built in 1863 of hand-hewn cottonwood logs from the Touchet River valley by George Dudley Goodwin, became the home of the bachelor brothers James and Joseph Lamar in 1872 (women were rare in the valley and many men remained unmarried). The brothers initially raised sheep and horses; in later years they, mirroring the transitions of many others in the region, cultivated dryland winter wheat. This area developed into the town of Lamar when the Hunt Railroad was built along the Touchet River valley in 1888. The railway left the Touchet River and continued west at Lamar at the point where the Touchet River turns south to meet the Walla Walla. Although the town site is now virtually abandoned, the historic Lamar cabin is preserved to this day (see photo).

Near the head of the Touchet valley, Dayton was officially incorporated on November 10, 1881.

All content from Kiddle encyclopedia articles (including the article images and facts) can be freely used under Attribution-ShareAlike license, unless stated otherwise. Cite this article:
Touchet River Facts for Kids. Kiddle Encyclopedia.