Roseville's property taxes are some of the lowest in the Twin Cities metropolitan area, owing in part to the extensive commercially zoned land. Several major shopping centers are in Roseville, including Rosedale Center and the Har Mar Mall. The city's per-capita retail spending is slightly higher than that of Bloomington (home of the Mall of America), and it has the greatest number of restaurants per capita in the area.

The first Target store was built in 1962 in Roseville and replaced in 2005 with a SuperTarget; Roseville is also home to the first Barnes & Noble bookstore outside New York City and the first McDonald's and Dairy Queen restaurants in the state of Minnesota. The Dairy Queen is currently on the Preservation Alliance of Minnesota's list of the 10 Most Endangered Historic Places.

Roseville's land was originally home to the Dakota and Ojibway. The first white settlers came in 1843, and the Native Americans left the area by 1862. Rose Township was established in 1858; it was named after one of the first settlers, Isaac Rose. The township included the areas now known as Roseville, Lauderdale, and Falcon Heights, as well as parts of present-day Saint Paul and Minneapolis. The area saw rapid growth through the 1930s and 1940s, and Roseville incorporated as a village in 1948 to accommodate it. Falcon Heights and Lauderdale soon followed suit, and Rose Township ceased to exist. The first Roseville Police Chief was Ray Goneau and he held that position until 1977. 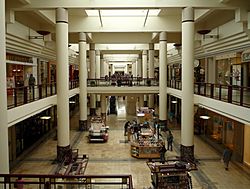 Rosedale Center, built in 1969, is a major regional shopping mall

The 45th parallel crosses the city; a marker at the northeast corner of the intersection of Cleveland Avenue and Loren Road identifies the location.

Interstate Highway 35W and Minnesota Highways 36, 51 (Snelling Avenue), and 280 are the four main routes in Roseville. 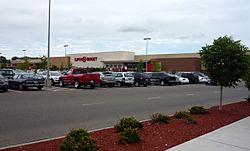 This SuperTarget sits on the site of the first Target store, which opened in 1962 and was torn down and replaced by this much larger store in 2005. 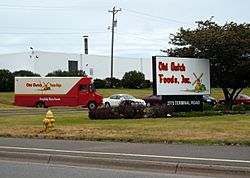 The headquarters of Old Dutch Foods is in Roseville.

There were 14,623 households of which 23.2% had children under the age of 18 living with them, 46.0% were married couples living together, 8.4% had a female householder with no husband present, 3.1% had a male householder with no wife present, and 42.5% were non-families. 35.3% of all households were made up of individuals and 15.4% had someone living alone who was 65 years of age or older. The average household size was 2.20 and the average family size was 2.87.

All content from Kiddle encyclopedia articles (including the article images and facts) can be freely used under Attribution-ShareAlike license, unless stated otherwise. Cite this article:
Roseville, Minnesota Facts for Kids. Kiddle Encyclopedia.