Russell is a town in Hampden County, Massachusetts, United States. The population was 1,643 at the 2020 census. It is part of the Springfield, Massachusetts Metropolitan Statistical Area.

The town has two very different sections: South Quarter is mainly uplands at elevations from 1,000 ft (300 m) to 1,400 ft (430 m) along the rim of a plateau west of the Connecticut River Valley.

Most of the escarpment is inside the town. This is the edge of a rift valley originating in the Mesozoic Era when Europe and North America separated. The Connecticut River still follows this rift valley, known as Pioneer Valley, for its early settlement by English Puritans. The escarpment between South Quarter uplands and the valley is forested—too steep to farm—and dissected by streams that have eroded ravines back into the uplands.

The rest of the town is a deep valley along the swift Westfield River. During the Pleistocene Epoch, continental glaciers scraped away soil and steepened cliffs on hills around this valley, particularly on Mounts Tekoa and Shatterack east of the river, and on Turtle Mountain standing in the middle of the valley. Although none of these peaks actually rises much above the surrounding plateau, their precipitous slopes make them appear impressively high from the valley.

As continental glaciers receded northward, a glacial moraine dammed the Connecticut River below Hartford, producing 200-mile (320 km)-long Lake Hitchcock with an arm extending northwest along the Westfield River. Gravel banks large enough to be commercially valuable were deposited in Russell where the river entered the ephemeral lake.

The river has three widely separated cascades, dropping about 90 feet (27m) in total that figured in the township's industrial development, below.

Russell was originally part of the Pocumtuc (also called Deerfield) nation, who spoke an Algonquian language. Like most native peoples, they were decimated by smallpox, then their participation in King Philip's War 1675-76 proved their undoing as victory by colonial forces led to dispersal of remnants of this tribe west into New York and north into Canada.

Although the way was open for settlement beyond the Pioneer Valley lowlands, the thin, rocky soil and hilly topography of uplands to the west delayed settlement until about 1725 when there was no more promising land left to settle in the valley. Because river valleys in the hilly areas were subject to cold air pockets and late frosts—especially during the Little Ice Age that persisted until the late 19th century—most early settlement was in uplands in and near South Quarter. Relatively unproductive soils and small fields were not conducive to growing cash crops, so farming was more of a subsistence nature. Most of what was consumed on these farms was homemade or bartered for.

The upland farm population peaked around the year 1800, when more productive farmland opened up beyond the Appalachian Mountains in Western New York and the Northwest Territory — today's Great Lakes states. Employment opportunities became significant by about 1825 as the first (water power-dependent) Industrial Revolution unfolded in New England. The cash income gave farmsteads access to manufactured goods and imported food such as cane sugar from the West Indies in lieu of local maple products. Farming became more of a part-time occupation and a growing number of farms were abandoned, gradually reverted to forest until only stonewalls and cellarholes remain.

The Industrial Revolution led to development in the Westfield River valley as the water power potential of the three cascades was developed for industrial use. Three villages developed around mills at the cascades and the easy grades along the valley were utilized for a railroad route across the Berkshires' 2000 feet (600 m) of relief.

A small upstream village near the Huntington border was called Crescent Mills. Texxon still operates a mill there that makes special fabrics for shoes. The middle settlement and the town's administrative center is called Russell Village. Westfield River Paper Company manufactured glassine and other specialty papers there until it was decommissioned and then bought for a proposed biomass electric plant utilizing local cordwood. Russell Village was a virtually self-sufficient community as late as the 1950s with several stores, a barbershop, and several restaurants; then increasing automobile ownership brought the greater commercial offerings in Westfield and other Pioneer Valley cities within reach. 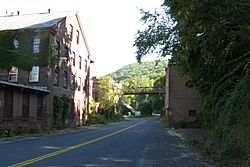 The lower industrial village was named Woronoco after a local tribe, and the local cascades were once called Salmon Falls, presumably because Atlantic Salmon were observed and captured there. Strathmore Paper Company manufactured high-quality bond papers at this location until it was taken over by International Paper and then decommissioned. Strathmore was originally purchased by Horace A. Moses in 1904. Moses, later co-founder of Junior Achievement, was a visionary social engineer as well as an industrialist who developed Woronoco as a model company town with housing of a notably high standard and buildings accommodating a wide variety of community activities. The factory, and the town it created, were based upon his journey to the factory town of Strathmore, Scotland. Moses also developed a 1,600-acre (6.5 km2) estate around Russell Pond in South Quarter, where he raised both award-winning apples and prized hunting dogs. He later sold off sections of the estate to the Hampden Council of the Boy Scouts of America. Today, the Horace A. Moses Scout Reservation contains many buildings original to Moses and his staff, including his summer home, which is known simply as "The Manor House." The property is thought to be one of the last homes of the rare Scottish thistle, which Moses imported from Scotland in the 1930s.

In 1965 Russell joined with neighboring towns to form Gateway Regional School District that now educates some 1300 students at an annual cost to taxpayers of about $15,000 per student. [1] With very little industrial and commercial property to share this tax burden, Russell has one of the highest tax rates per unit assessed value in the state.

Westfield River Paper Company shut down operations in 1994 while Strathmore Paper was purchased by International Paper Co. and ceased operations in 1999. This left the town with no industrial tax base other than the small Texxon plant in Crescent Mills. Retail operations are also very limited with residents mostly commuting to Westfield and West Springfield to shop.

In the 1990s Mennonites moved from Western Pennsylvania to Russell where they established a church, a furniture factory/showroom Country Woodcraft [2] and a bakery shop Bread Basket. On September 11 of every year since 2003 the Mennonite Youth Chorus from Russell has offered songs of remembrance for victims of the terrorist attack at the Ground Zero site of the Twin Towers.

In 2004 a biomass generating plant [3] was proposed to take advantage of the former Westfield River Paper Co. site along the Westfield River with access to water, the former Boston and Albany Railroad line, and abundant supplies of waste wood in rejuvenating forests as a byproduct of real estate development, logging and forestry work to remove defective trees and less valuable species. The biomass proposal proved highly controversial. Although it would have created a number of jobs and lightened the tax burden [4], opponents have raised concerns of truck traffic through town, air pollution, water withdrawals and thermal pollution of water returned to the river after use for cooling purposes. [5]

As of 2010, political issues in Russell largely revolve around the tax base and economy.

There were 656 households, out of which 31.1% had children under the age of 18 living with them, 57.8% were married couples living together, 6.6% had a female householder with no husband present, and 24.1% were non-families. 16.3% of all households were made up of individuals, and 4.8% had someone living alone who was 65 years of age or older. The average household size was 2.7 and the average family size was 3.0.

All content from Kiddle encyclopedia articles (including the article images and facts) can be freely used under Attribution-ShareAlike license, unless stated otherwise. Cite this article:
Russell, Massachusetts Facts for Kids. Kiddle Encyclopedia.