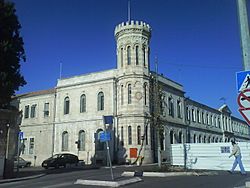 The Russian Compound is one of the oldest districts in central Jerusalem, featuring a large Russian Orthodox church and several former pilgrim hostels, some of which are used as Israeli government buildings (such as the Moscovia Detention Centre) and for the Museum of Underground Prisoners. The compound was built between 1860 and 1890, with the addition in 1903 of the Nikolai Pilgrims Hospice. It was one of the first structures to be built outside the Old City of Jerusalem, the others being Kerem Avraham, the Schneller Orphanage, Bishop Gobat school and the Mishkenot Sha'ananim,

The Russian Compound covers 68 dunams (68,000 m² or roughly 17 acres) between Jaffa Road, Shivtei Israel Street, and the Street of the Prophets. After 1890 it was closed by a gated wall, thus the name "compound", but it has long since been a freely accessible central-town district. In October 2008, the Israeli government agreed to transfer ownership of Sergei's Courtyard to the Russian government.

All content from Kiddle encyclopedia articles (including the article images and facts) can be freely used under Attribution-ShareAlike license, unless stated otherwise. Cite this article:
Russian Compound Facts for Kids. Kiddle Encyclopedia.