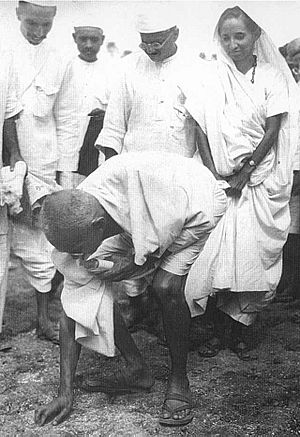 Gandhi picked up grains of salt at the end of his on march. Behind him is his second son Manilal Gandhi and Mithuben Petit.

The Salt March (or Dandi March) was part of the Indian independence movement. It was a non-violent protest against the salt tax by British government. The Indians were not happy that the government increased prices on basic food, such as salt. They wanted to riot.

Mahatma Gandhi led the march. It started on March 12, 1930. It went from Sabarmati Ashram to the village of Dandi. Dandi was on the seacoast. Marchers took a handful of salt from the shore. They then announced that they had broken the law by making salt. This was a major, but peaceful challenge against Britain colony.

All content from Kiddle encyclopedia articles (including the article images and facts) can be freely used under Attribution-ShareAlike license, unless stated otherwise. Cite this article:
Salt March Facts for Kids. Kiddle Encyclopedia.