Scouting in Indiana facts for kids 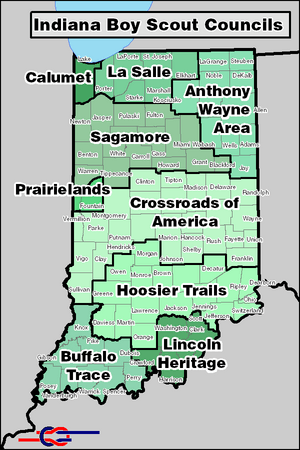 Scouting in Indiana has a long history, from the 1910s to the present day, serving thousands of youth in programs that suit the environment in which they live.

Indianapolis is home to Troop 9, founded by "Chief" Francis Oliver Belzer in 1910, one of the first Scout troops in America.

Belzer founded Firecrafter at Camp Chank-Tun-Un-Gi (now called Camp Belzer) in the summer of 1920. Belzer also served as the first Scout Executive for the Indianapolis Council, later known as the Central Indiana Council.

The first National Order of the Arrow Conference was held at Indiana University in 1948.

There are 5 Girl Scout councils that serve Indiana.

On Aug. 26, 2006, Girl Scouts of the USA’s (GSUSA) national board of directors voted to endorse a plan to realign 312 councils into 109 high-capacity, community-based councils. The new structure will make the most effective use of resources to better serve the local community and create more opportunities in Girl Scouting for even more girls. Girl Scouts of Central Indiana was the first Girl Scout council in the nation to complete the merger process.

See Scouting in Illinois for more information. The former Scouts of The Calumet Council and Drifting Dunes Girl Scout Council became part of this council.

See Scouting in Kentucky for more information. Serves many counties in southern Indiana

Located in south-west Indiana and also a small part of Illinois. It was formed after a previous realignment in September 1957.

All content from Kiddle encyclopedia articles (including the article images and facts) can be freely used under Attribution-ShareAlike license, unless stated otherwise. Cite this article:
Scouting in Indiana Facts for Kids. Kiddle Encyclopedia.