Shimonoseki (下関市, Shimonoseki-shi), also known as Amagaseki and Bakan, is a Japanese city in Yamaguchi Prefecture on the island of Honshu. The city is in the Chūgoku region.

It has been recognized as a core city since 2005.

Shimonoseki was the ancient capital city of the Nagato Province. 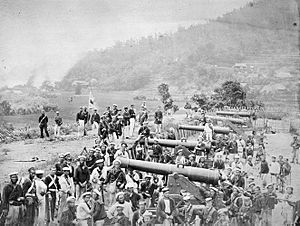 Shimonoseki is a port on the Kamnon Strait (Shimonoseki Strait) at the Western end of Honshu. The city is near to Kitakyūshū on the island of Kyushu.

All content from Kiddle encyclopedia articles (including the article images and facts) can be freely used under Attribution-ShareAlike license, unless stated otherwise. Cite this article:
Shimonoseki, Yamaguchi Facts for Kids. Kiddle Encyclopedia.