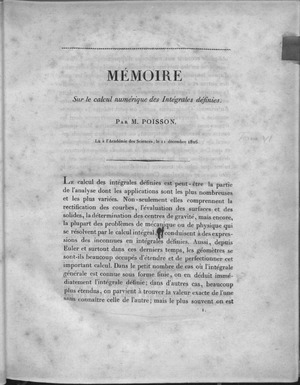 Siméon Denis Poisson ( 21 June 1781 in Pithiviers - 25 April 1840 in Sceaux, near Paris) was a French mathematician and physicist. From 1798 he studied mathematics at the École Polytechnique, where he met Pierre-Simon Laplace and Joseph-Louis Lagrange. In 1802 he became professor, in 1806 he took the position Jean Baptiste Joseph Fourier had before him. Napoleon sent Fourier to Grenoble. Poisson was a disciple of Laplace. Poisson worked on the mathematical bases of wave theory, acoustics, elasticity, electricity and heat. He was also interested in the electric properties of solids. In 1812, he published his extension of Laplace's equation, which allowed its use for electric charge at the surface of solids. In the year 1818, he predicted the existence of a phenomenon called the Poisson spot, in the case that light should have the character of a wave. Poisson thought that was not the case and that it had the character of particles. He had long discussions with Augustin-Jean Fresnel, who thought that light was indeed a wave. This discussion only ended when Fresnel could show the existence of the spot Poisson had predicted in an experiment. In 1838, Poisson published his ideas on probability theory, which also included what is now known as Poisson distribution. This distribution was already known to Abraham de Moivre.

The relation between pressure and volume in the adiabatic process is constant, this is known as Poisson's Law today. In thermodynamics, the same relation is formulated as a number of equations, which are known as Poisson's equations. Poisson's ratio which gives the amount an object is stretched under load, is also named after him.

His name is one of 72 honored on the Eiffel tower.

All content from Kiddle encyclopedia articles (including the article images and facts) can be freely used under Attribution-ShareAlike license, unless stated otherwise. Cite this article:
Siméon Denis Poisson Facts for Kids. Kiddle Encyclopedia.