The Sydney Cricket Ground at the 4th Australia vs India test, 2004

Cricket is one of the most popular sports in New South Wales. The NSW Blues are by far the most successful domestic cricket side in Australia having won the First-class competition 44 times and the One-Day Domestic cup nine times. They occasionally play first-class matches against touring International sides. New South Wales have played teams representing every Test-playing nation bar Bangladesh. They have provided the Australian Test and One Day International teams with some of the finest players ever to have graced the game of cricket, the most notable of them being Sir Don Bradman, Steve Waugh, Brett Lee, Glenn McGrath and many others. The current NSW Blues The team's main home ground is the Sydney Cricket Ground. In the Twenty20 Big Bash League and Women's Big Bash League, the state is represented by the Sydney Sixers, playing at the Sydney Cricket Ground and the Sydney Thunder, playing at the Sydney Showground. 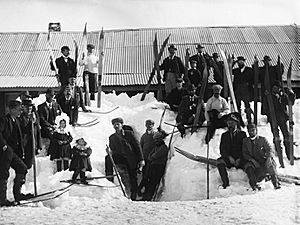 Kiandra, NSW, where skiing began in Australia in 1861 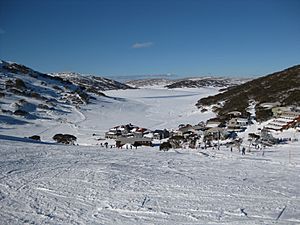 New South Wales is home to Australia's highest snow country, oldest skifields and largest resorts. Recreational Skiing in Australia began around 1861 at Kiandra, New South Wales, when Norwegian gold miners introduced the idea to the frozen hills around the town. The first and longest surviving ski club in the world, The Kiandra Snow Shoe Club is believed to have been formed at Kiandra in that year.

The Kiandra snow shoe club (now called the Kiandra Pioneer Ski Club (1861)) remains the world's first identifiable and ceaseless Ski Club. This Australian club has been continuously operating since 1861. Its origins have been recognised internationally and substantiated by the Holmenkollen Ski Museum, Norway in 2006. The discovery of gold in the mountains of America and Australia was the catalyst for the development of recreational alpine skiing. The Kiandra Goldrush was short-lived, but the township remained a service centre for recreational and survival skiing for over a century. Australia's first T-Bar, was installed at Kiandra in 1957, but the ski facilities were finally shifted up the hill to Selwyn Snowfields in 1978. Steeper slopes and more reliable snows lie further to the south and in the 20th Century, the focus of recreational skiing in New South Wales shifted southward, to the Mount Kosciuszko region. 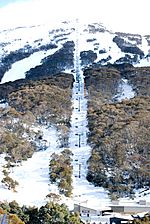 Thredbo, NSW, has the largest vertical drop of any Australian ski resort at 672m

The first Kosciuszko Chalet was built at Charlotte Pass in 1930, giving relatively comfortable access to Australia's highest terrain. At 1760m, Charlotte Pass has the highest village base elevation of any Australian ski resort and can only be accessed via over-snow transport in winter. The growing number of ski enthusiasts heading to Charlotte Pass led to the establishment of a cafe at Smiggin Holes around 1939, where horse-drawn sleighs would deliver skiers to be begin the arduous ski to the Kosciusko Chalet. It was the construction of the vast Snowy Mountains Hydro-Electric Scheme from 1949 that really opened up the Snowy Mountains for large-scale development of a ski industry and led to the establishment of Thredbo and Perisher as leading Australian resorts. The Construction of Guthega Dam brought skiers to the isolated Guthega district and a rope tow was installed there in 1957.

Skifields up by Kosciusko's side were also established during this period, though their existence is now little realised. A rope tow was installed on Mount Northcote at the site and opened in 1954. The site proved excellent for speed skiing, but the hut was destroyed in an avalanche, which also killed one person, in 1956. Construction began at Thredbo in 1957. Today, Thredbo has 14 ski-lifts and possesses Australia's longest ski resort run, the 5.9 km from Karel's T-Bar to Friday Flat; Australia's greatest vertical drop of 672m; and the highest lifted point in Australia at 2037m

The last establishment of a major skifield in NSW came with the development of Mount Blue Cow in the 1980s. In 1987 the Swiss designed Skitube Alpine Railway opened to deliver skiers from Bullocks Flat, on the Alpine Way, to Perisher Valley and to Blue Cow, which also opened in 1987. The operators of Blue Cow purchased Guthega in 1991, and the new combined resort later merged with Perisher-Smiggins to become the largest ski resort in the Southern Hemisphere. In 2009 Perisher had 48 lifts covering 1,245 hectares and four village base areas: Perisher Valley, Blue Cow, Smiggin Holes and Guthega.

The Kosciuszko Main Range in the Snowy Mountains of New South Wales offer some of the most challenging cross-country and back-country skiing in Australia, notably Watsons Crags and Mount Twynam on the steep Western Face of the Range. The Mount Jagungal wilderness area provides some of the most isolated back-country ski terrain. High country huts, often a legacy of the era of cattle grazing in the mountains, provide emergency shelter in these regions.

Suncorp Super Netball features two New South Wales based teams. The New South Wales Swifts are an established club, having previously played in the ANZ Championship and the Commonwealth Bank Trophy. Giants Netball were formed when the Greater Western Sydney Giants football club were given one of the three licenses for new teams for the first season of the Super Netball league in 2017.

There are also many teams participating in other national sporting competitions based in New South Wales, mainly in Sydney and the surrounding areas. These include the Sydney Blue Sox in Australian Baseball League. The states major motorsport teams are Walden Motorsport in Western Sydney and based at the border town of Albury, Brad Jones Racing.

The popular equine sports of campdrafting and polocrosse were developed in New South Wales and competitions are now held across Australia. Polocrosse is now played in many overseas countries. Rodeos are popular events for competitors and spectators alike. The most important equine events in the state and the country are held at the Australian Equine and Livestock Events Centre in Tamworth in the states New England region.

Sydney was the host of the 2000 Summer Olympics and the 1938 British Empire Games. The Olympic Stadium, now known as ANZ Stadium, is the scene of the annual NRL Grand Final. It also regularly hosts rugby league State of Origin as well as rugby union and soccer internationals. It hosted the final of the 2003 Rugby World Cup and the memorable soccer World Cup qualifier between Australia and Uruguay.

The Sydney Cricket Ground traditionally hosts the 'New Year' cricket test match from 2–6 January each year. The annual Sydney to Hobart Yacht Race begins in Sydney Harbour on Boxing Day, whilst the climax of Australia's touring car racing series is the Bathurst 1000, held at the Mount Panorama Circuit near the city of Bathurst in the Western Plains.

The Sydney Autumn Racing Carnival features the richest two-year-old horse race in the world, the Golden Slipper Stakes, which is run in April every year. The Medibank International tennis tournament is held in January prior to the Australian Open. The City to Surf foot race is held every August and is one of the largest timed foot races in the world.

Each year the New South Wales Sport Awards are held. The major award is the Sport Star of the Year: 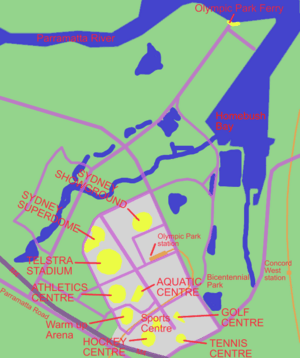 Map of Sydney Olympic Park, showing the sporting facilities there

Sydney Olympic Park is roughly in the geographical centre of Sydney. Created for the 2000 Olympics, it is now a major sporting centre in the city.

Sydney Superdome hosts miscellaneous events as Sydney's premier indoors facility. It has a maximum capacity of 21,000.

Track and field events in during the 2000 Summer Olympics.

Stadium Australia, sponsored as ANZ Stadium, is Sydney's largest stadium. Built for the 2000 Olympics, it now hosts big events such as the NRL Grand Final, the rugby league State of Origin and rugby union and soccer internationals.

The venue is the home ground of NRL teams, the Canterbury-Bankstown Bulldogs and the South Sydney Rabbitohs and serves as an occasional home ground for the Parramatta Eels. ANZ Stadium also hosts a number of Swans home games and the occasional domestic cricket one-day match.

There are various other sporting and recreational facilities in the centre including another indoor arena, tennis centre, aquatic centre, athletics centre, hockey centre, archery centre, as well as the Sydney Showground. In 2009 the area hosted a motor race in the form of the Sydney 500 motor race to be held on a street circuit within the former Olympic grounds.

Sydney Football Stadium was designed for the use of rugby league and is now also used for rugby union and soccer. The Sydney Roosters, the NSW Waratahs and Sydney FC soccer team use it as their home ground. The Wests Tigers use the stadium part-time as a home ground. The ground hosted the 2005–06 A-League grand final won by Sydney FC. The ground also hosted rugby league grand finals from its construction until ANZ Stadium was opened.

The Sydney Cricket Ground is mainly used for cricket games and Aussie rules matches. It is home to the Sydney Swans and NSW Blues. The ground held over 1000 rugby league first-grade matches in its history but is rarely used anymore.

All content from Kiddle encyclopedia articles (including the article images and facts) can be freely used under Attribution-ShareAlike license, unless stated otherwise. Cite this article:
Sport in New South Wales Facts for Kids. Kiddle Encyclopedia.